Howdy!!
My guest today is Codi Gary. Codi has brought the second book in her Loco, Texas series, Make Me Crazy.

Plus...checkout her list of 10 things, it's a little crazy... but then again who am I to judge. I have an unhealthy obsession with bed linens and almost ran through a field of Lavender in Southern France, naked!

For this post, I thought I’d tell you ten random things about me and have some fun with it.

So, first up is my Halloween obsession. My husband and I go nuts decorating our house (even when we live in the country where no one will see it), and I watch the Halloween episodes of all my favorite shows. We are so big on Halloween, even my kids start asking about when Halloween is five months in advance.

Second weirdly fun thing about me is I have this weird obsession with Calico Corner. They are animal families with tree houses and cars. I never had them as a kid, and every time I see them in the store, I have serious toy envy.

My third interesting thing about me is my almost pathological need for people to like me, which can sometimes get me into trouble.

Quirky trait number four is my love of thunderstorms. Nothing is more beautiful to me than sitting at the front window and watching a storm roll in, leaving the window open to listen to the wind, rain, and rumble.

Halfway through the line up with number five, I have an intense hatred of onions…to me, they smell and taste awful and can actually cause me to gag.

Six is that my two biggest fears are of heights (a step stool makes my knees weak) and animal attacks, which is why I usually go hiking under duress (like my husband is taking my children with or without me and I want to protect them). Irrational? Perhaps.

Seven is that every year on my birthday, my mother calls and recites the same story; “seventeen years ago today, I had a skinny, beautiful baby girl.” It goes on and on and the year may change but the story doesn’t and I wait for her call every birthday morning.

Eight is that when I was researching my family tree, my great great grandmother was a prostitute. Go figure!

Nine is that I fell in love for the first time at fifteen, was devastated when he broke my heart and the only thing that brought me out of my misery was Julie Garwood’s For The Roses.

And last, number ten, is that the reason I love to write about close female friendships is because I’ve had so few that have lasted into our twenties. Those women that I do have the honor of calling friend are very dear to me, for I have made mistakes not only in matters of the heart, but with my friendships as well.

I hope you enjoyed these little tidbits about me and never hesitate to look me up on Facebook or Twitter. I am quite the social junkie!

Make Me Crazy
by  Codi Gary 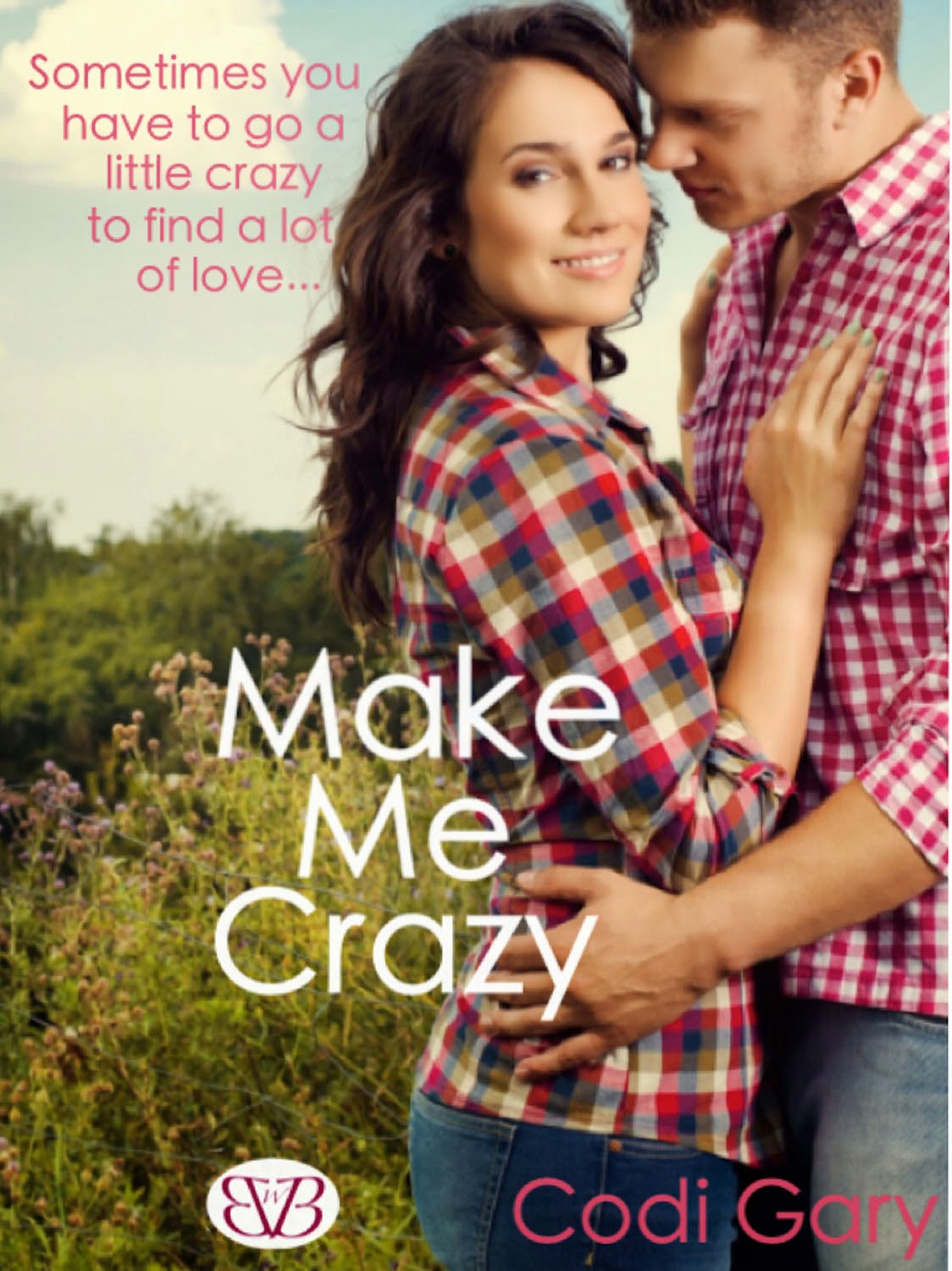 Miranda “Rand” Coleman has seen the way love can wreck a person and wants absolutely no part of it. When her granddaddy dies suddenly, he leaves a clause in his will that has her married in three months or she loses her inheritance. Unwilling to give up the Double C Ranch, she starts to set her eyes towards the eligible men in town, with little luck in finding a man she can stand for a minute let alone a year. Until she sets eyes on the new veterinarian and enlists the help of her womanizing best friend, Jake, to help.

Jake Hansen is a single guy who likes his women pretty and uncomplicated, with no plans to settle down anytime soon. When he decides to help Rand hook her man, he has no idea the effect watching Rand change would have on him. Especially when she starts letting her gorgeous brown hair down and showing off a body he didn’t even know she had. Before too long, Jake isn’t just lusting after his best friend, he’s feeling downright possessive. But when it comes down to the wire, will he get over his issues and step up to the alter…or lose the only woman he was ever meant to love?

Hell and Damnation, I’m dying.
Rand tried to open her eyes but the early morning light sent shooting pain from her frontal lobe to the back of her skull. Her mouth tasted like a baked cow pie and her stomach was churning painfully. She moved a bit and felt something hard tighten around her waist. Her eyes popped open, despite her body’s protests and she stared into Jake’s sleeping face. She was spread over him like a blanket and it was his arm around her middle keeping her immobile.
Trying to be easy, she reached down to grab his hand, moving it off her waist as gently as she could so as to not wake him. As soon as she was free, she rolled off the bed and stood up, staring down at him in confusion. Jake Hansen, asleep in her bed. They hadn’t shared a bed since the concert trip to Dallas, when Red had refused to sleep with Jake and whined about sleeping on the floor. So Rand had crawled in with Jake and let Red have the second bed to himself. She hadn’t even been aware of Jake that night, just drifted off into a deep sleep, but boy was she aware of him now.


She walked around the bed, stumbling a bit as her stomach lurched. Damn, she was never going to drink again. She slipped into the bathroom, grabbed her tooth brush and brushed her teeth, feeling a little less disgusting as she ran the bristles through her mouth. She tried to remember what had happened the night before, but patches were missing.

An obsessive bookworm for twenty years, Codi Gary likes to write sexy small-town contemporary romances with humor, grand gestures, and blush-worthy moments. When she’s not writing, she can be found reading her favorite authors, squealing over her must-watch shows and playing with her children. She lives in Idaho with her family. Visit her website www.codigarysbooks.comfor latest news, social media, or just to say hi!


Where can you find Codi???


This is the second book in the Loco, Texas series. Book 3 will be released in June 2014. 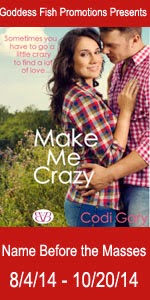 Thanks for sharing Make Me Crazy Codi, and best of luck with your Loco, Texas series.