Here's a little something to get you into the Halloween spirit. Orange freaky fonts and all!

****GIVEAWAY ALERT****
Kayden will be awarding $25 Amazon gift card to a randomly drawn winner via rafflecopter during this tour.
******* 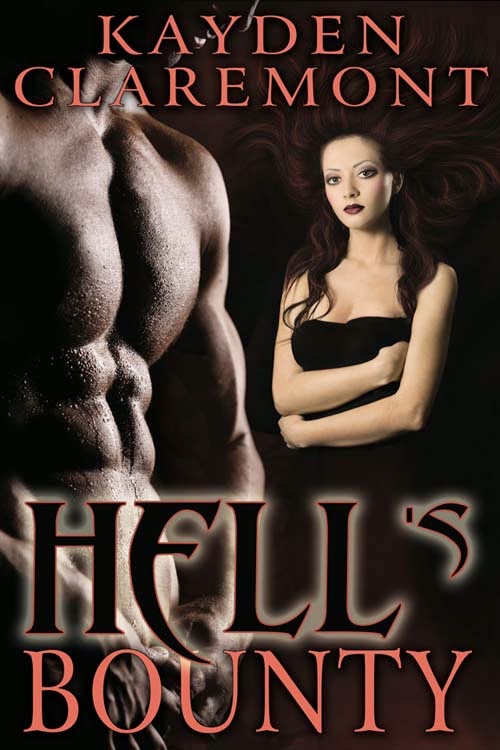 Raven Hart, a succubus bounty hunter for Hell, is on a hunt. With her query in sight, she hits a brick wall, or rather the very hard chest of a giant sexy man. She might have lost the prize for now, but she's a winner when the hottie wants to get physical.

Marcus Dionysius, a Nephilim working for Heaven, has one mission—to prevent Hell’s beauty from stealing souls meant for the higher plane. But he soon realizes he’s met his sexual match. She’s naughty enough to tempt his senses, but her innocence means he can’t walk away when she needs him most.

Working together to discover who’s snatching souls from Heaven, they realize the true danger is falling in love.

A giant of a man ducked as he entered the bar, paused, took off his sunglasses, tucked them into his jacket pocket, and waited for his eyes to adjust to the dim lighting. He surveyed the bar, then decided his path. Keeping his head high and his eyes skimming the people, he avoided eye contact with everyone.

She watched him. An undeniable current of electricity pulsed through him. Stopping beside her, he dwarfed her slight stature with colossal height, muscular build that showed through the suit, and an air of confidence that made everyone in the bar notice him. He signaled the bartender for a single-malt whiskey, neat.

Once the drink showed up, he cradled the glass in his immense hands, then nodded at her and took a sip of the golden liquid. Pure ecstasy showed on his face. “You waiting for someone special?”

Raven tried to fight the attraction arcing between them. “Everyone is special”

A smile crept across his generous lips, and humor twinkled in his mocha eyes. “I guess.” He took another sip.

Scanning him from head to toe, she asked, “How tall are you?”

He looked down at her with choirboy eyes and his smile widened. “Seven-five, give or take.”

Running her fingertips around the top of the glass she surveyed him once more. If Raven didn’t know better, she’d think he was an immortal, but she could usually sense them. Each immortal had a unique aura about them, a distinct imprint whether fae or shifter or undead.

When she’s not at her day job she’s crafting more tales of love or spending time with her husband and children.

Where can you find Kayden??? 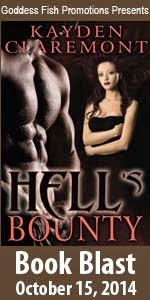 Thanks for stopping by Kayden and the best of luck with HELL’S BOUNTY.
Cheers,
Nancy
Posted by Nancy Adams at 00:30:00