From acting on Days of Our Lives, to hosting a radio talk show to becoming a bestselling author, I don't think there is anything Beth Albright can't do?

Except maybe get bored! lol

Beth's newest release The Perfect Score, has the perfect combination of sassy southern belles and the men who love them.
So if you are ready for a good romance with some cheeky laughs thrown in, then you best pick up this little gem available now from Tule Publishing Group.

The Perfect Score
by Beth Albright 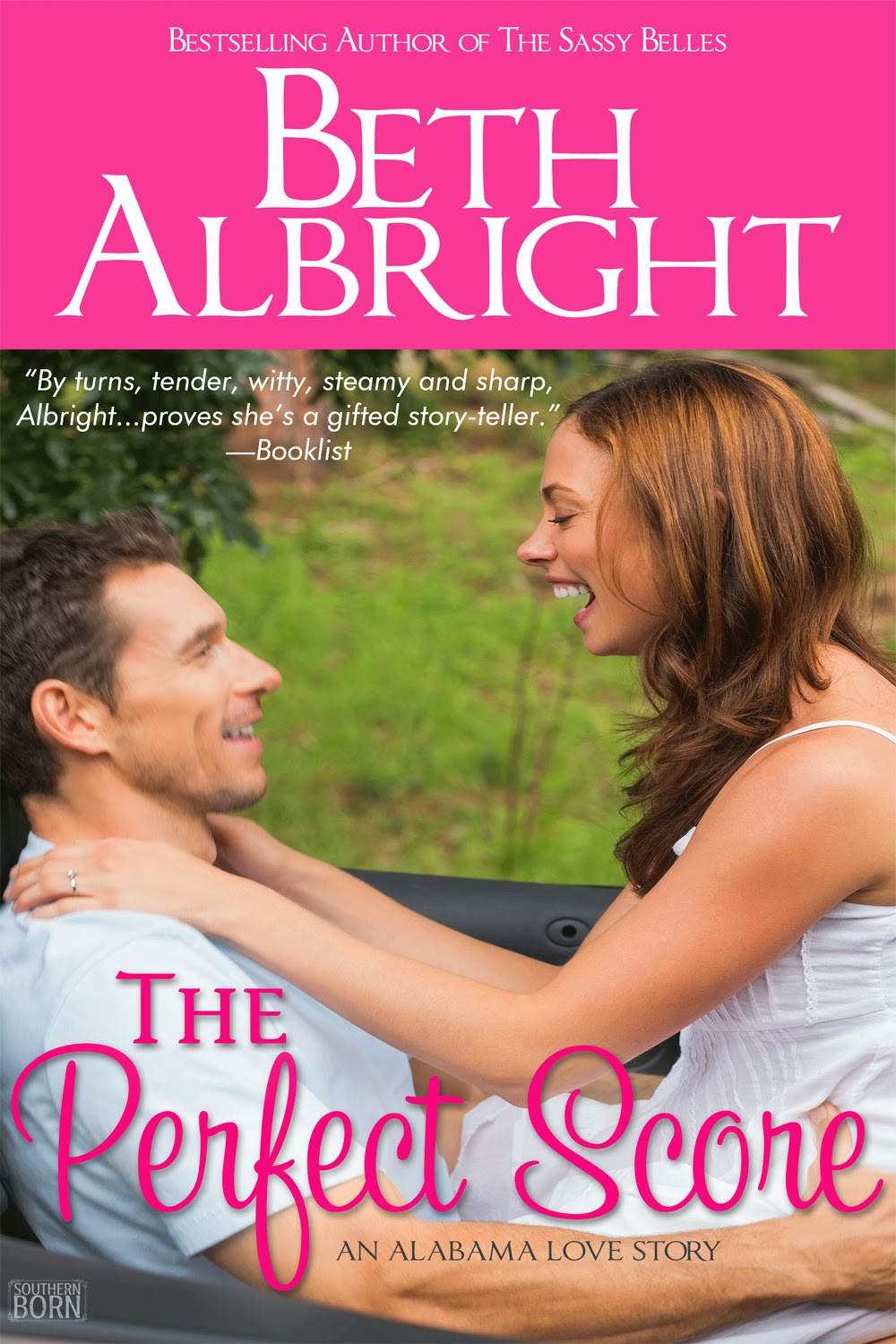 Ginny Bloom Hunnicutt is crawling back home to Cottonwood Cove Alabama-- her promising CNN news-reporting career in shambles when an on-air flub cost her the job and cost CNN a lawsuit. Putting ego aside, she takes a position at the Chatterbox – the local weekly newspaper run by her mother, the town gossip. What’s a southern belle to do in a crisis but run home to her mama?

But when a mysterious hot high school football coach rolls into town, Ginny’s luck begins to change. Seems he has more secrets than a shady politician and Ginny’s determined to dig up the truth, and write the story that will get her career back on track. Everyone knows in a small, southern town, nothing stays private.

The coach’s star player has some secrets of his own and when Ginny uncovers it all, she must decide if she should reveal everything or follow her heart and protect the people she has grown to care for.

"Author Beth Albright weaves a saucy southern tale filled with intrigue, romance and laugh out-loud comedy. From the bright lights of Friday night football to the darkened bedroom of unexpected lovers, it’s a richly layered story with more twists and turns—and mud, than an Alabama back road."

“I’ll have another,” I said as I ordered my second dirty martini. The Sand Box was a dingy little bar near the pier in Cottonwood Cove, Alabama.

Covered in fishing ropes and other remnants of the life on the lake, the place was a dive for the small-towns folk who lived here, and for the kids who were lake rats during the summer. But summer had ended weeks ago, the kids back at school, and we were well into September now. Late that night, the place was nearly empty.

I sat there nursing my drink, drowning myself in what I had come to believe was the most embarrassing moment of my career. The dim lights swung in old metal fixtures from the ceiling of the Sand Box. A jukebox playing Hank Williams Jr. stood missing some of its colored lights in the corner. A few old wooden tables were scattered around with a couple of red vinyl booths shoved in the corner near the pool table and dartboard.

I had come home, tail tucked neatly between my legs, to lick my wounds. My name is Virginia Bruce Hunnicutt. I go by Ginny. My sisters and I all have my mom’s maiden name as our middle name. I kept it as my last name for my TV job. Ginny Bruce, reporting. I was a reporter for CNN in Atlanta. Was being the key word here. I had been fired two weeks prior because one of my sources was a fake. I swear I checked the credentials but the story turned out to be full of inaccuracies and CNN is now in a lawsuit. I may never work in the media again. And CNN was my dream job.

My name is now as muddy as the Alabama red dirt, which is exactly where I ran home to: Cottonwood Cove, Alabama. It’s the safest place to be. And even though I had become quite the big city girl, the one I had always dreamed of being, somehow, the safety of being home in Cottonwood Cove had its perks. Like being in this dive bar in the middle of the week late at night, with only one other soul in here besides me. Oh, God—and he was making his way over to me just as I was finishing my second round.

“What’s your poison?” he asked in his deep sexy baritone. He was beautiful. Rugged and sculpted with dark wavy hair and gorgeous lips; he was about six foot three and deliciously well built. His dark blue eyes undressed me as he moved closer to me—or maybe that was just me thinking I’d be more comfortable with my clothes off with this gorgeous man. He was dressed in a navy Polo button-down and perfect fitting blue jeans. His large muscular thighs and broad defined shoulders were evident even under his clothes. One dimple accentuated the right side his cute, boyish face. He smiled at me like he was fixin’ to eat me up, and oh, I was feeling like dessert as he slid in next to me at the bar.  He looked like an athlete. Or a god. Come to think of it, in Alabama, those are one in the same. Regardless, he was heaven to look at, or maybe I was seeing him through double martini glasses. Probably the latter since I only weighed about 125 pounds and I knew better than to have more than two drinks. Ever.

“I’m having dirty martinis,” I answered. “You?”

“I’ll have the same,” he said to the bartender. 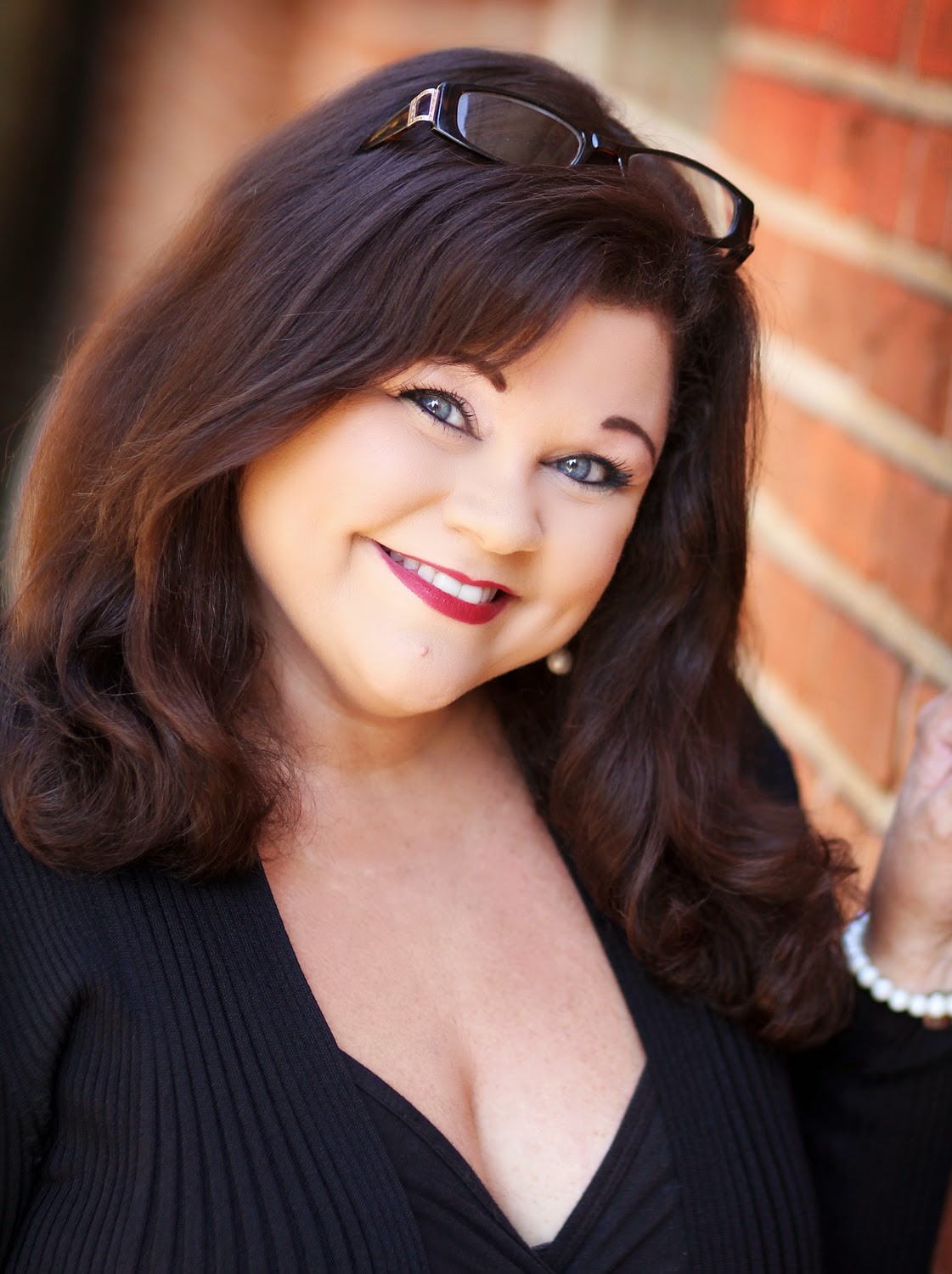 Beth Albright is the author of the award-winning, best-selling series The Sassy Belles. After knowing Beth for just a few short seconds you are sure to learn she is from Alabama. No, its not the lilt of magnolia you can still catch in her voice, or even the way she lovingly describes her undying love for her famous alma mater's football champions. She will tell you she loves Tuscaloosa, even after living quite literally all over the country. Though Beth has had a remarkable career, from New York City to Hollywood, and all points in between, she has never forgotten where she came from...and what she loves. That's why when it came time to write, Beth had no choice but to write about Tuscaloosa and The University of Alabama, and all the quirky people she still calls family, though some do not actually share her bloodline!

Beth Albright has always been a storyteller. After spending nearly 15 years in talk radio, as a talk show host, playing the part of a principal character on the soap opera, DAYS OF OUR LIVES, owning her own acting school and children’s theater, and raising a son who was a nationally ranked figure skater, Beth has decided to return to her roots; storytelling. When she was in the sixth grade, her teacher gave her the floor every Friday to tell her stories. See, Beth was a talker, a future talk show host in the making, and she was telling stories so much that her teacher couldn’t teach. The teacher told 12 year old Beth if she would begin writing her stories down, she would be allowed time to share those stories with the class.

And she’s been writing, AND talking ever since. Beth has interviewed Bob Hope, Oprah Winfrey, Betty White, Wolfgang Puck and George Burns live from the Chinese Theatre, as well as numerous other celebrities, and authors. Then Beth became a principal character on Days of Our Lives. But through all of the excitement of talk shows and soap operas, Beth loved telling stories to her audience the most. With a degree in Journalism from her beloved University of Alabama, She always remains true to her roots, born and raised in Tuscaloosa, “My grandfather was the play by play announcer for the Crimson Tide in the 50s!” Beth will proudly tell you.   She is a down homespun girl, although she currently lives in San Francisco with her TV producer husband and her brilliant son. But her heart is always in Alabama.

Where can you find Beth???? 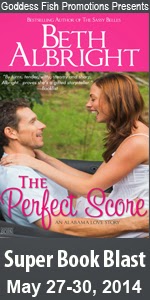 Thanks so much for stopping by Beth and the best of luck with The Perfect Score.