Here's a little somethin' somethin' for those of you that love a wet and wild ride...ummm...I mean read, yah that's it. lol 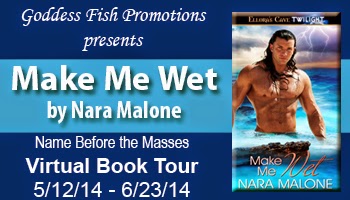 I asked Nara a few questions about life as a author and her inspirations when writing.
Take it away Nara...

What is your biggest inspiration?

Nature--I write about what nature is and what it could be. Shifter stories appeal to me as a vehicle to tell stories immersed in wild and beautiful settings.

Where did you get the inspiration to write Make Me Wet?

I spent several days camping on Chincoteague Island. I knew the setting would play a huge role in this story, to the level of becoming almost a character, and I needed to spend some time reconnecting with the beauty and wildness of the shore before I could start writing.


What research went into Make Me Wet?

I spent time camping on a barrier island during some wild autumn weather. I studied selkie lore and kelpie lore, plus the various water goddesses. The real research for me was building Selkie Island and Shadowling Manor virtually. In bringing the sets to life, and later selkie shifters to life, I learned so much about the world of my characters. Every book is a journey and this one in particular changed my perspective. The first time I put on a selkie avatar and shifted into a seal when I dove into the water, my eyes were opened to what a beautiful world there is under the ocean. I got to explore it from a seals-eye-view and it made me see that Ronin’s curse was not all bad.

Why did you pick paranormal romance?

Do you ever feel like this world could use a little magic? There are so many problems that seem impossible to solve. It makes me wish I could wave a wand or chant a spell to make something better. Even so, when it came to Ronin’s curse, something apparently unsolvable, the happily ever after didn’t come from magic. I set out to create a magical story, but wound up with a magical world where magical things can happen without magic.

Your favorite aspect about being an Author?

It gives me a way to share fantastic beings and worlds with readers and hopefully sometimes it inspires them to keep tackling those unsolvable problems that crop up in a life. There’s always an answer and while I don’t know what the answer will be when I start a journey to help a character solve a problem, hanging in there and fighting through it always reveals the way in the end.

The hardest part about writing is…

Getting started, making the switch from real world to fantasy world. I cross that bridge by using to virtual reality to take me into fantasy.

****GIVEAWAY ALERT***
Nara will be awarding a $20 EC gift card plus a reader residence in Reader Cove at the Virtual Greyville Writer's Colony to one randomly drawn commenter during the tour.
********

Make Me Wet
by Nara Malone 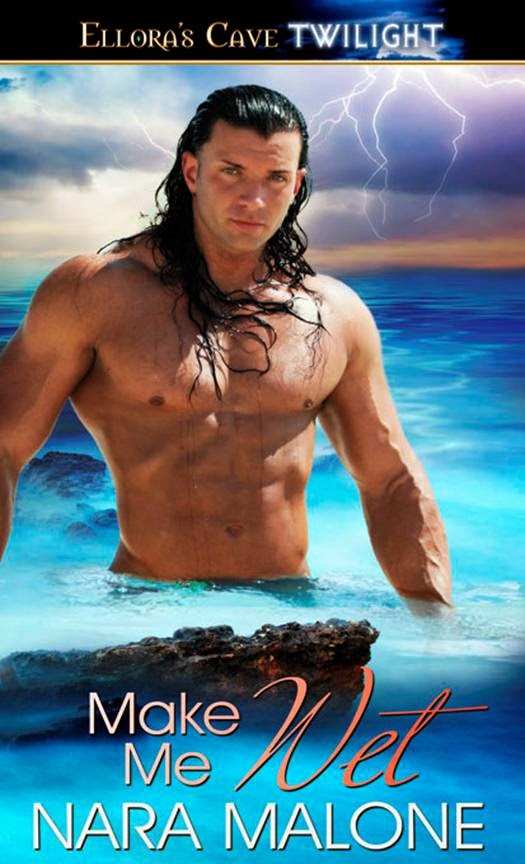 Seven tears cast upon the water summon the selkie, summon seal across the ocean, summon man from beast—liquid keys to break the curse. Freed one night every seven years, Ronin is doomed to repeat that cycle into eternity. Unless he can find a woman powerful enough to resist a selkie’s irresistible pheromones and sex magick.

Maille believes she lost reality between Maine and New Mexico. Between where she is now and where she should be. She believes in facts, not magick. But facts can’t explain how she wound up naked on a beach with the sexiest man she’s ever laid eyes on. Or how she knows in her bones that losing herself in the passion Ronin offers is a path to disaster.

It’s going to be a long, hot, wet night. Caught between sex magick and a sexy selkie, disaster is inevitable for Maille. To break the enchantment she has to rely on the oldest magick of all—the power of love-drenched hearts.

A piercing cry rose above the thunder of surf. Human? A seal could sound so
human it was hard to tell the difference. Whichever, Maille recognized it as a wail of
mortal distress. She couldn’t say how she understood that, no more than she could say
how she wound up on the beach. One fact she was certain of—she couldn’t ignore it.

Without thought for consequences she plunged into the surf, diving under swells,
power-stroking through roiling water.

Once past the breakers Maille paused, treading water as she turned in circles,
searching in the inky swells for the curve of a human head. Impossible with the waves
breaking moonlight into sequined facets and the rise and fall of swells tall as houses.

She’d never find him. She needed him to cry out once more.

An irregular shape, not seal-like or wavelike, caught her attention. As she paddled
closer, she made out a man waving, heard his hoarse cry before his head disappeared
below a wave. He resurfaced choking.

She dove under the water, swimming straight for where she’d seen him last. She
resurfaced as he went under again, but she was close enough now to reach his long
hair, swirling like dark kelp in the water. She grabbed a handful.

It was surprisingly easy to pull him along, as if he had managed to overcome his
instinctive terror and submit to her rescue. He might not have been so submissive had
he realized, as she did now, that they weren’t making progress.

Maille fought down a sudden kick of panic in her chest, struggling to swim parallel
to the shore, caught by swells that tossed them dangerously close to jagged rocks. She
had to concentrate her energy on swimming north until they were beyond the rip where
she was free to swim shoreward.

When her feet finally found ground, a wave slammed her, flinging them both onto
the sand. Depositing them in a tangle of limbs. Maille on top.

A small wave washed over them, and the sensation was that of a liquid blanket
settling around her shoulders and then melting away. Panting, draped over his body,
Maille was too spent to lift her head from a pillow of seaweed.

Another wave swept up, warm liquid fingers caressing her thighs.

She needed to move him higher up the beach, away from the rising tide, see to his
needs. With a groan she pushed up to hands and knees, still straddling his body.

Damn! She’d hauled in one hell of a wet dream. Jet-black hair fanned out on the
sand. His body lean, long and lusciously muscled. She started to lick her lips, caught
herself, and forced her tongue back in her mouth. She was supposed to be saving his
life, not jumping his bones.

Something was wrong. That realization drowned attraction in a wave of adrenaline.

His chest didn’t seem to be moving. Her breath caught and her heartbeat kicked up
to double time. Maille thought there’d been a slight rise and fall of his chest beneath her
breasts when they’d first washed ashore. His lips looked blue. But when she put her ear
to his chest, the beat of his heart was strong and quick.

She scraped her mind for facts.

Fact—a heart could beat for several minutes after breathing stopped.

Would his lips still be blue?

Fact—in the moonlight everything looked blue.

Fact—his eyelids were at half-mast, and there was a barely perceptible gleam
aimed at her. He probably didn’t need to be resuscitated.

Fact—she could discover the state of his respiration in other ways than this slow
descent of her head and the pressing of lips to his. He tasted like sin and secrets.

His lips were warm and firm under hers, and they parted in a humid mingling of
breath. Goddess, he smelled wonderful. She inhaled the scent of male and mystery
laced with magick. Worries over what was real, what wasn’t, where she was, trickled
away like so many grains of sand.

Fuck a bunch of facts.

Where can you find Nara????

You can learn more about Nara and her books at:  www.naramalone.com

Reader Cove is part of the Virtual World at Nara's Nook.

You can contact her through the following social media links:

The more you comment, the better your chances of winning.
The tour dates can be found here: 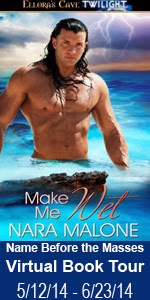 Thanks for stopping by today Nara and the best of luck with Make Me Wet!