Extinct is my forth book, my first shifter-romance and it is FINALLY out for the world to embrace!
Whew! I gotta says...it's about damn time.
This little puppy seemed to take forever to write.

What is forever you ask?

Well...I came up with the idea in 2009 on a summer road trip to Vancouver Island and it was released last week March 2014. That's almost 5 years! That's a long damn time.

But you know what? I'm okay with it. I would rather take my time then rush to write something that I'm not happy with. I guess that's the rebellious
redhead in me. LOL

Despite the time it took to get Extinct published, I have to say that I really enjoyed the time spent researching and writing this particular book.

One, because I just love animals, wolves in particular. I learned so much them about while doing my research, they are truly fascinating creatures.

And two, because I was able to use Vancouver Island (one of the most beautiful places on earth) as my setting.
Listen, if you ever get a chance to go, go. You won't be disappointed.
But if you can't...well pop some corn and get a drink because that's what Google maps is for. lol

As part of my promotion the lovely ladies from Goddessfish Promotions  are organizing a Virtual Excerpt Tour for Extinct.

So follow the tour.
The tour dates can be found here:
http://goddessfishpromotions.blogspot.ca/2014/03/excerpt-tour-extinct-by-nancy-adams.html

Enough babbling from me. Enjoy the mini snippet of Extinct below and I hope to hear from you during the tour.

Theo’s sole purpose for the last ninety-eight years was to protect his wolf. That changed the moment he met Drew and the wolf called ‘Mate’. 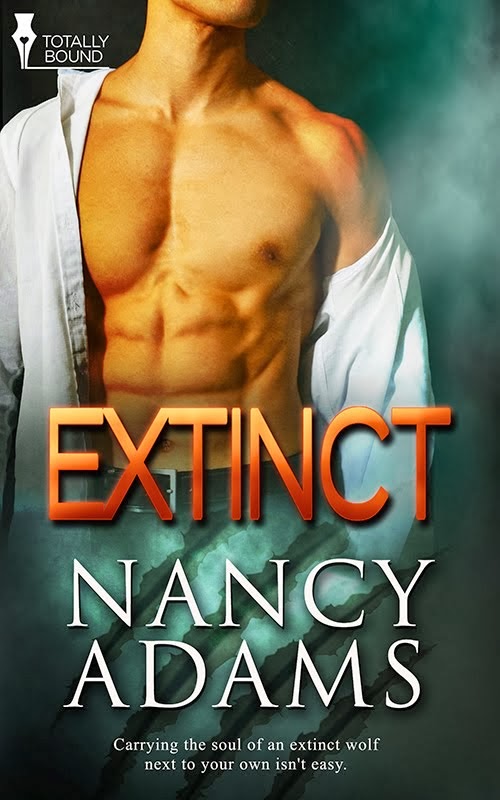 Carrying the soul of an extinct wolf alongside your own isn’t easy. Swapping into said wolf is even harder. Ask Theo Grey—he’s been doing it for ninety-eight years. Yet, after surviving two world wars, witnessing the space race and patiently enduring the eighties, you’d think he’d have seen it all, but nothing could have prepared him for meeting Tofino’s new vet, Drew O’Bannion and according to the wolf, his mate.

Drew loves her dog, sleeping in and coffee. She also loves being a vet. The main reason behind her accepting the veterinarian practice offered to her from a family friend. Hoping for a slower pace at life Tofino seemed the ideal spot. What she didn’t expect was Officer Theo Grey. Theo is tall, dark and drop dead gorgeous, a definite 10 on the ‘wow’ scale. Regardless of his looks, there is more to Theo, there is her unexpected attraction for him. It’s unnerving and completely out of character for her, but she is able to match Theo’s hungry kiss, for hungry kiss.

With their desire growing at an alarming rate and the threat of an unknown shooter roaming the woods of the coastal town, Theo must face the ultimate decision—let Drew go for her own safety or claim his mate for all time.

Reader Advisory: This story contains scenes of violence and threats of non-consensual sex

“You know very well that wolves don’t pick a mate based on beauty. There’s a deeper connection, it’s like a psychic link between the two. The wolf is picking up this link, and by your behavior, you are too, you just don’t recognize it for what it truly is. You’re thinking too much like a human.”

“That’s because I am human.” Theo tugged his cap back on.

“You stopped being a normal human the moment the wolf joined with you. You are so much more.”

Here's where you can find me!