It's Monday!
I know, Boo...Hiss...
Nobody likes Monday. But this isn't any normal boring old Monday. Today, I plan on starting off the week with a little spine-chilling Gothic Horror. So pack a pair of extra panties and call the Winchester boys 'cause Author Clarissa Johal is here and she has brought her Paranormal Gothic Horror book, Struck. 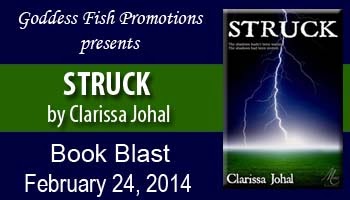 ****GIVEAWAY ALERT***
Clarissa will be awarding an ecopy of STRUCK to three (3) randomly drawn commenters during the tour. 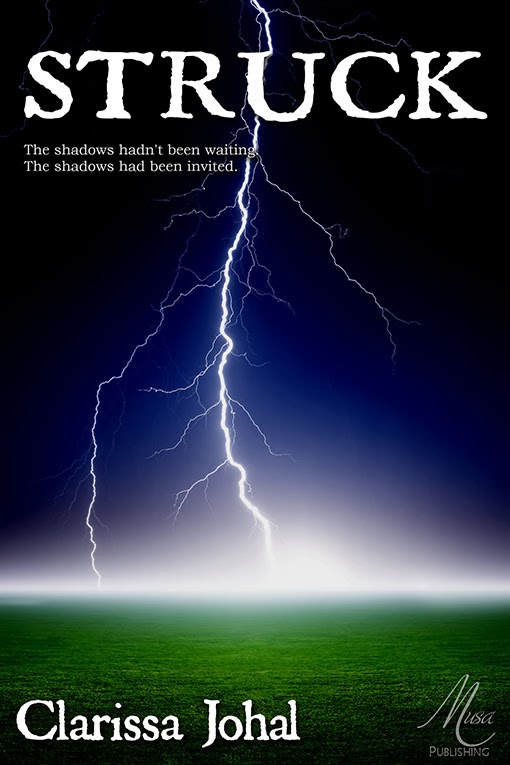 The shadows hadn't been waiting.

The shadows had been invited.

After a painful breakup, Gwynneth Reese moves in with her best friend and takes a job at a retirement home. She grows especially close to one resident, who dies alone the night of a terrific storm. On the way home from paying her last respects, Gwynneth is caught in another storm and is struck by lightning. She wakes in the hospital with a vague memory of being rescued by a mysterious stranger. Following her release from the hospital, the stranger visits her at will and offers Gwynneth a gift--one that will stay the hands of death. Gwynneth is uncertain whether Julian is a savior or something more sinister... for as he shares more and more of this gift, his price becomes more and more deadly.

A bolt of blue-white lightning snaked from the sky and hit the ground in front of her. The thunderclap that shattered the air was deafening. Gwynneth slammed on her brakes and skidded. It was a slow skid, or it seemed to be. Spinning around and around in a circle, she felt like she was watching herself from afar. Time felt like it was slowing. Oddly enough, she found herself wondering if there would be white or red flowers on Hannah’s casket. Or maybe none at all.

Gwynneth’s face smacked against the steering wheel. Reality hit her along with the pain. She had forgotten to wear her seatbelt. She pressed her fingers lightly to her throbbing temple and winced. “Shit!” Thankfully, she was in one piece. Gwynneth opened the car door. Lightning lit the area and bathed her senses in a flash of blue-white. Icy rain hit her skin. Stupid! You left your jacket back at the funeral home. She ran around the car and checked all the tires. The back one was flat, and on top of that, her car was quite obviously stuck in a ditch. “Great.” She had no spare tire, she knew that for sure. She also had no idea which way led back to the retirement home. Her headlights cast a weak glow through the rain. Soaked to the skin and shivering, Gwynneth peered into the darkness. A muddy road meandered across saturated fields and off into nothingness.

She sloshed back to her car and quickly turned the engine off. She certainly didn’t need a dead battery on top of a flat tire. “Okay, Gwen,” she said aloud, “you need to figure out what to do.” Rain ran in rivulets down her face and her tie-dyed T-shirt stuck to her like a second skin. I’m a soggy, shivering rainbow. She started to walk and cursed the fact that her cell phone wasn’t charged. Seth was always bugging her about that. “Suck it up, Gwen. It rains in Oregon too.” The inky blackness was disconcerting. Lightning intermittently illuminated the area like the flash of a camera. A snapshot of a road to nowhere. Gwynneth hoped that she was at least walking in the right direction. Her teeth were chattering so hard she was in danger of biting her own tongue. Thunder rolled up her spine and along her scalp like probing fingers.

Her thoughts wandered back to Hannah. A diary. I wonder what she wrote about? She wouldn’t read it, of course, it was private. I’m sure she just wants me to throw it away so her children don’t either. A pang of loss sliced through the cold and Gwynneth shook it off. They had spent countless hours chatting and Hannah never mentioned a diary. She bit her lip. If she could only turn back time, Gwynneth would have told her how much their time together had meant. Hannah had always encouraged her to start painting again, but also understood why Gwynneth couldn’t.

A loud ‘crack’ sounded and an iridescent white light surrounded her. Two things registered: a searing pain that ripped down her back and the ground which seemed to be pulled away from her at an alarming speed.

Pain shot through the back of Gwynneth’s head as she opened her eyes. Somebody was standing over her. She tried to focus on the face, but it hurt too much. A cool hand slid across her forehead. She opened her eyes again.

Pale, almost white eyes. High cheekbones, aquiline nose, and a well-shaped mouth. Long, white hair. Ageless. Beautiful, like a Michelangelo. All of those details registered with clarity before agony ripped through her body. She arched her back and cried out. The man murmured something into her ear which she couldn’t understand. She could feel the vibration of his voice and his breath on her neck as he gathered her in his arms. She opened her eyes and saw lightning fork to the ground silently behind him. She blacked out again. 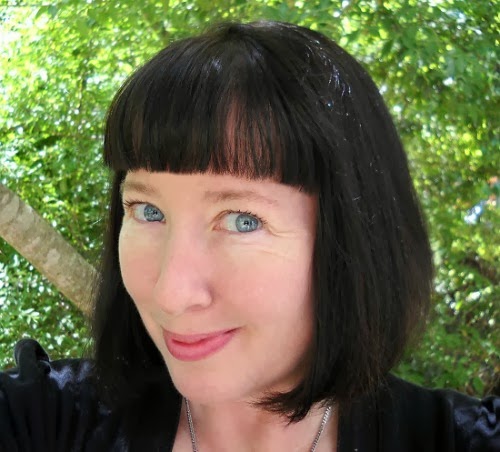 Clarissa Johal has worked as a veterinary assistant, zoo-keeper aide and vegetarian chef. Writing has always been her passion. When she’s not listening to the ghosts in her head, she’s dancing or taking photographs of gargoyles. She shares her life with her husband, two daughters and every stray animal that darkens the doorstep. One day, she expects that a wayward troll will wander into her yard, but that hasn’t happened yet.

Where can you find Clarissa? 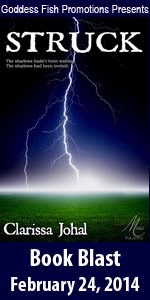 The more you comment, the better your chances of winning. The tour dates can be found here:
http://goddessfishpromotions.blogspot.com/2014/01/virtual-book-blast-tour-struck-by.html

Thanks for coming by Clarissa and giving us that much needed Monday adrenalin rush.