Ghost Encounters with Gabrielle Holly...A Triple Scoop of I Scream

It's Wednesday ( Hooray!) or - Hump-day (that also gets a Hooray!) and Ms. Gabrielle Holly has brought us some more spine-chilling tales from the great beyond. Oh! and she has brought the second book in her Ghost Encounters series, A Triple Scoop of I Scream too.
You have our attention Gabby...

“How My Ghost Characters ‘Told’ Me Their Names”


Last summer I'd passed through a nearby Mississippi River town and fell in love with an old, abandoned building on Main Street. The date carved into the sandstone pediment is A.D.1888. Half of the windows are boarded over, the red brick is crumbling, and the wood trim is nearly devoid of paint. The moment I saw it I told my travelling companion, "That's the setting for Book 2 in Ghost Encounters.”


I'd snapped a couple of photos with my cellphone and, once home, I searched the Internet for more pictures of the tiny downtown area. I printed out a couple of the shots and hung them near my desk.


When I was about halfway into A Triple Scoop of I Scream I became hopelessly stalled. Two pivotal characters - the ghosts of star-crossed lovers - still remained nameless and I couldn't work out the logistics of a certain scene. I tried to focus on the task at hand, but that building would not let me concentrate. I had to go see it in person again. Immediately.


It was not an ideal day to be out and about. The Midwest was in the midst of a seemingly endless heat wave. The air conditioning in my Jeep was broken and the temperature that afternoon was well over 90-degrees. I'm usually a bit of a wimp when it comes to uncomfortable weather, but I was absolutely certain that I had to spend some time up close and personal with that freakin' building if I was ever going to get any more writing done.


I was cranky and overheated by the time I arrived in the historic district. The building sits on a corner and I walked first one block and then the other. I looked at it from across the street and then from the alley. I walked up the steps, ran my hand along the facade, and peered into windows. I spent a good hour viewing and photographing the building from every angle. I got close-ups of the disrepair and wide angles to illustrate the building's place on the block.


Satisfied that I had everything I needed to carry on, I started to head back to my car. The street slopes down to the river and I'd parked near the end of the block. I was almost to the car when that crumbling old building, called to me again. I felt a little silly trudging back up the hill and pulling out my camera again, but I was absolutely compelled to do so.


The sun had moved across the sky in the hour I'd been poking around and on this second trip up the hill, it hit the side of the brick building at a new angle. I was able to see that names had been scratched into some of the bricks. Two of them were side by side and written in the same straight-angled style: "Vinnie" and "Daisy".

There they were, the names of my two ghost-lovers. I snapped a photo of each etched brick and headed back down the hill. By the time I reached the car, I'd worked out the logistics problem with the scene I'd been writing. It was as if once I knew Vinnie's and Daisy's names, I could tell their story.

A Triple Scoop of I Scream


Book 2 in the Ghost Encounters Series 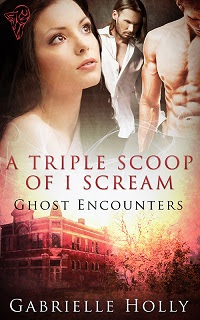 Toni finds herself the owner of a rundown ice cream parlor in an historic Wisconsin river town. The shop is haunted by the ghosts of two lovers who can’t rest until their tragic mystery is unraveled.

While Toni looks for answers and works to get the shop up and running, she finds herself drawn to her handsome neighbor, book store owner Liam Greco. Toni soon learns that Liam has a psychic secret of his own.

When the hauntings get physical, Toni enlists the help of the ghost hunters from TV’s “Paranormal Research Team” and reunites with the show’s sexy star Thomas Becker. Passion and physic energy surge when Toni, Thomas and Liam engage in a decadently delicious ménage that helps the dead cross over and leaves the living craving more.

I hope you’ll enjoy A Triple Scoop of I Scream. You can read an adults-only excerpt on my website:


A Triple Scoop of I Scream buy links

About the Ghost Encounters series:

Follow reluctant spiritual medium Toni Bianchi as she discovers the extent of her powers over ghosts and men.  Toni's powerful sexual energy acts as a conduit for wayward spirits and affects the mortals around her.

Her impulsive nature and misguided business sense lead her into a string of odd real estate ventures with one common amenity – each has a resident ghost who needs Toni's special gift to help find eternal peace through earthly gratification.

Will Toni be able to manage her ghost encounters long enough to forge a lasting human connection?

Gabrielle Holly writes romance with a little humor and a lot of heat. She lives in the Midwestern United States with her husband and their two enormous, incessantly-shedding dogs. Gabby has worked as a newspaper humor columnist, a stand-up comic, a radio show host, a magazine writer & editor, and a freelance journalist. She has a short attention span and enjoys reading, travel, spending time outdoors, hunting for antiques, watching movies and attending live theater & concerts.

Another creepy tale and another great book. I've gotten Goosebumps both times, Gabby, good job. Let's see if Friday you can scare the pants right off us with your third book, Stage Fright. See you then.