Author Jorja Lovett... and her new release The Wolf on the Hill

Can two stubborn wolf shifters let down their guards long enough to take a chance on love?
Today, I would like to welcome fellow Total-E-Bound author Jorja Lovett. Jorja is here to share new contemporary/shifter romance titled, The Wolf on the Hill.
Take it away Jorja...

Characters are a pesky nuisance at times. My husband thinks I'm nuts when I say I have someone talking to me in my head. Let's face it he has a point. But that's exactly what happened to me with my wolf shifter.


I was working on a completely different story when Caleb Jackson came knocking, dressed in his bad boy bike leathers, demanding I tell his story and give him somewhere to call home.
I did my best to ignore him but he's a stubborn sod.
On a weekend away, driving through the Northern Irish countryside, I could just imagine a wolf pack roaming through the desolate hills. I created the Olcan Hills – Olcan means wolf in Irish – so my wolf shifters had a place to call their own.

As I wrote Caleb's story, I fell in love with his cheeky sense of humour and his vulnerability, and he needed a feisty partner to spar with. Mia immediately came to mind, and oh look, she has a gorgeous hot brother too. <grin>
I'll admit I cheated on Caleb with Rory, but when you read The Wolf on the Hill, you'll realise why.
That's the thing when you're writing about a community, all the residents have their own stories to tell. I'm just putting the finishing touches to the second book in The Wild Irish Wolves series now, with the spotlight firmly on Rory Blake.
Hmm, can I have a Rory/Caleb sandwich, please?
Inevitably, I've met new residents all keen to come out on play, so I guess I'll be staying in the Olcan Hills for some time. *Sigh* It's a tough job but someone has to do it…
LOL! I have to say I have the very same problem, and I too... am willing to tough it out. 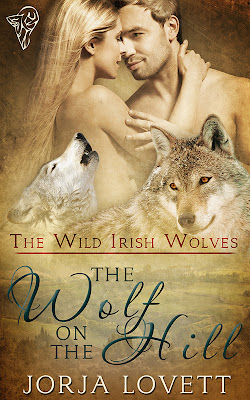 Can two stubborn wolf shifters let down their guards long enough to take a chance on love?
Lone wolf Caleb Jackson is only back in town long enough to sell his late father's house, and the bad memories with it. He never expected to find his mate.
Good girl Mia Blake never behaves badly. Except for the time she shifts into her wolf, chases a stranger through Olcan Hills, and has the hottest sex of her life on the forest floor.
He has no desire to settle down. She is afraid to upset her family. But, with someone determined to destroy Caleb's inheritance, and his secret fling with Mia getting hot and heavy, moving on isn't as easy as he'd hoped.
Can either of them let down their guards long enough to take a chance on love?
Excerpt time...Hooray!
Oh WOW! That was good. I can see why Caleb was so hard to ignore.  Now, more than ever, I'm dying to meet Rory!  LOL
Author Jorja Lovett
Jorja Lovett is a British author with both Irish and Scottish roots, which makes for a very dry sense of humour. Writing since she was old enough to wield a pen, it wasn't until she joined her crit group, UCW, that she pursued her passion seriously.
Now, with Joe Manganiello as her permanent muse, if she can leave the pause button on her Magic Mike DVD long enough, she hopes to spend the rest of her days writing steamy romances.

You can find Jorja on her...
Blog
Website
Facebook
And check out her inspiration for Caleb and Rory on Pinterest!   I already did! tee hee
The Wolf on the Hill is the first novel in Jorja's ,The Wild Irish Wolves series.
The Wolf on the Hill is available NOW for download from Total-E-Bound Publishing, with a general release date of Friday May 17, 2013.
Click on the link to get your copy...with 10% off no less.
You gotta check it out!