Through His Heart‏ by Deborah Camp

I've got a juicy Paranormal Romantic Suspense from Author Deborah Camp, today.
THROUGH HIS HEART is A Minds Eye Novel and this little gem is sure to send tingles up your spine.

****GIVEAWAY ALERT****
Deborah will award a $50 Amazon or BN GC to one randomly chosen winner via rafflecopter during the tour.
*******

THROUGH
HIS HEART
A Minds Eye Novel 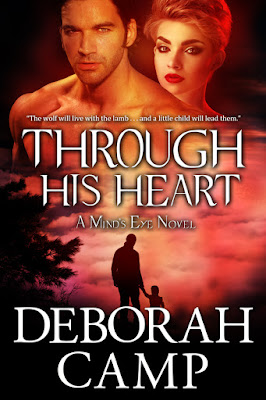 “Sending you an SOS.”

When psychic Trudy Tucker hears this plaintive cry in her mind and then connects psychically with a little girl’s kidnapper, she is drawn to a small town in Missouri where everyone is suspect – including herself and her lover, celebrated psychic detective Levi Wolfe.
As she and Levi work together to sort through whom and what to trust, an innocent life hangs in the balance.

Levi shifted his shoulders as if a weight had settled on them and his black brows knitted. His thick, sooty lashes tapped his cheeks as he squirmed a little. After taking a lung-filling breath, he let it escape in a long hiss. Trudy wondered what he was experiencing, what was going on in that brilliant mind of his. What did he see? Shadows moving in the distance? Souls stepping forward? A young girl emerging and answering his call? From the movement of his eyes behind his closed lids, she knew he was there . . . there among the spirits.

His spirit guide! She sat forward, watching, waiting. He hadn’t connected with Gregory very much during the past few months. He’d told her that it bothered him, but that Gregory had reminded him that he only appeared when Levi needed guidance or centering. So, why had he appeared now? Was Levi having trouble? Had she been wrong to prod him into looking for Rachel over there?

“What’s going on?” Levi asked, his raspy voice carrying a sliver of doubt. “Who’s that? Is it . . . that’s not . . . no. No!” His eyes opened, wide and wild. He gasped for breath and emitted little grunts of panic with each exhale.

Trudy’s heart and spirits plummeted. “You saw her there? Rachel’s there?” A sob tore at her throat. How could she tell AmyLynn? Did the FBI know already?

“She’s there? Oh, my God, she’s dead. He killed her.” Trudy wrapped her arms around herself as she began to shake with the horrible knowledge. She’d failed. She’d been useless. Ineffective. A bad joke. The little girl . . . gone. Gone!

Author of more than 40 novels, Deborah lives in Oklahoma. She has been a full-time writer since she graduated from the University of Tulsa. She worked for a few years as a reporter for newspapers before becoming a freelance writer.
Deborah’s first novel was published in the late 1970s and her books have been published by Jove, New American Library, Harlequin, Silhouette, and Avon. She has been inducted into the Oklahoma Authors Hall of Fame and she is a charter member of the Romance Writers of America. She is widely published in non-fiction and writes and edits for a magazine focused on small businesses. Deborah taught fiction writing for more than 10 years at a community college.
She is currently working on a series of novels featuring two psychics who work with police nationwide to identify and track serial murderers.


Where can you find Deborah???

Thanks for stopping by today Deborah and the best of luck on your tour.