The Frailty of Things by Tamsen Schultz

Today my guest is Author Tamsen Schultz. The lovely Goddess' have organized a Virtual Name Before the Masses Tour for Tamsen's romantic suspense...The Frailty of Things, available now from Booktrope Editions.

1) I went to a girls’ high school and a women’s college (and I wouldn’t have it any other way). Although my family wasn’t catholic at the time, I did attend an Ursuline High School and then went on to attend Mount Holyoke College. I’m lucky to still call women from both of those institutions some of my closest friends. Here’s a few of us hanging out after 25+ years of friendship – not much has changed other than we drink nice wine now rather than cheap beer:

2) There are six people in my life to whom I can tell anything – I’m a very lucky girl. And yes, sometimes shades of them show up in my books.

3) I was the Area VI (California) Junior Novice Rider of the Year in 1988 (and please don’t comment on just how long ago that was!). I had a Morgan I competed at both Novice and Training levels before acquiring my slightly more athletic thoroughbreds for the upper levels. But “He’s a Society Dandy” (AKA Dandy) was the best first horse a girl could wish for (despite being somewhat of a grumpy old man).

4) While I love living in California, there’s nothing quite like sitting in front of a fire on a snowy night with a glass of whiskey. It’s peaceful, and yummy, and yes, just a little bit romantic too.

5) Speaking of which, I love whiskey and bourbon. This probably doesn’t qualify as something people don’t know about me since it shows up in my books a lot and it’s come up a time or two during interviews. So, while I’m including it in this list, I’m not really giving it its own number, it’s really more of a 4(a) than a fact 5. Here’s my current go to:

6) I love white water rafting. I haven’t done a ton of it, but I love the combination of being somewhere so peaceful and beautiful punctuated by occasional bouts of physical exertion and the reminder than everything isn’t always as safe as it sometimes seems.

7) I crave a sense of awe (and revel in it when I find it). Seriously, there is nothing better than finding something—an image, a place, a person, or just something—that makes you wonder.

8) I’ve worked with women leaders from all over world. For a few years I worked at private foundation that supported women peacemakers (and peacekeepers) from areas of conflict. I had the privilege of working with women from all walks of life and at all stages of life from places like Sudan, Azerbaijan, Armenia, India, Pakistan, Northern Ireland, the United States, Bosnia, Serbia, and South Africa.

9) I’ve been to Sarajevo. Hhmm, maybe this should be fact 8(a) since as part of the aforementioned job, I travelled to Sarajevo a few years after the war ended. It was an incredible trip for so many reasons. I’d love to go back now that nearly two decades have passed.

10) I’m fascinated by the psychology of negotiations and have a negotiators crush on Matthias Schranner. Prior to law school, I worked in the field of international conflict resolution and since law school, I’ve tended to find myself in roles that require/involve a lot of negotiation. I took a course last year offered by Matthias Schranner and it was one of the best negotiation courses I’ve ever taken. And yes, I totally developed a negotiators crush on him (that’s not like a real crush crush since I’m married and so is he, but I’m way crushing on all the work he’s done and experiences he’s had). 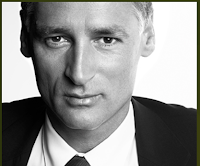 11)  I took a burlesque dance class. I’m not sure why, but I did and I had a good time. This wasn’t a one-time class either. It was an eight week course. Although I will say that while I enjoyed the class, I’m not too sad that I had to miss the final, public performance.

THE
FRAILTY
OF THINGS
by  Tamsen Schultz 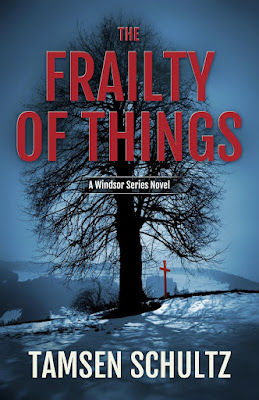 Independence. Kit Forrester is a woman who wears her independence like armor. Despite keeping secrets and hiding her past, she’s built a life she loves and is accountable to no one. Until, that is, one of the world’s most wanted war criminals sets his sights on her and she must weigh the risk to one against the chance of justice and closure for many—a decision Kit couldn't make on her own even if she wanted to.

Certainty. As a man who makes his living in the shadows of governments and wars, certainty isn’t a part of Garret Cantona’s vocabulary, and he’s just fine with that. But when Kit walks into his life, he realizes he’s never before been so sure about anything or anyone. Suddenly, he finds he’s looking at the world, his world, in a different light. And now that he is, he’s determined to protect it, and her, in whatever ways he can.


Frailty. No one knows better than Kit and Garret that an appreciation for what is, or what was, or what might be, can be born from the uncertainty and fragility of life. But when a hunt for a killer leaves Garret no choice but to throw Kit back into her broken and damaged past, even his unshakable faith in what they have together might not be enough to keep it from shattering into a million pieces.

EXCERPT
“We need to talk,” Caleb said. Kit didn’t respond for a moment. She and her brother didn’t talk. They never talked. Not anymore. There had been a time in their lives when that hadn’t been the case. There had been a time when she’d idolized her older brother, when he’d looked out for her, when they’d gone fishing together, and when she had believed that he had an answer for everything.

But that time had long ago passed, and they hadn’t been in each other’s presence for more than a few days a year for over a decade. Kit started to speak but stopped short when a second figure emerged from the passenger side of Caleb’s car.


She was glad her face was hidden in the shadows of her hat and scarf as Garret Cantona, her brother’s right-hand man, straightened to his full height. Kit was tall, easily five foot eleven, but Garret’s six-foot-three form dwarfed hers. Like Caleb, he wore jeans and work boots, but rather than a jacket, Garret sported a black sweater and a gray beanie. She knew the hat covered light-brown hair that, if it got too long, curled in ways that bothered him. And she felt, more than saw, his light-blue eyes—eyes rimmed with thick, black lashes—studying her.


“And I see you brought your Mini-Me,” she added, forcing her gaze from Garret back to her brother in time to see a look of irritation flicker across Caleb’s face.


AUTHOR BIO
Tamsen Schultz is the author of several romantic suspense novels and American Kin (a short story published in Line Zero Magazine). In addition to being a writer, she has a background in the field of international conflict resolution, has co-founded a non-profit, and currently works in corporate America. Like most lawyers, she spends a disproportionate amount of time thinking (and writing) about what it might be like to do something else. She lives in Northern California in a house full of males including her husband, two sons, four cats, a dog, and a gender-neutral, but well-stocked, wine rack. 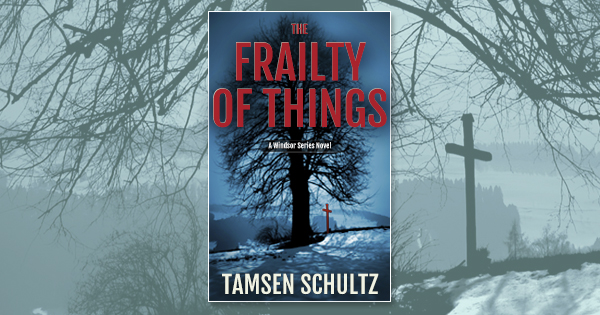 Thanks for stopping by today Tamsen and the best of luck on your tour!