Today I have a story for you that has a little bit of time travel and a whole lot-a history.

Wait a sec...does this sounds a bit familiar? LOL
If you've read my books you'll get that joke. ;-D

Time is Relative for a Knight of Time
is full of adventure, historical figures plus a big helping of the supernatural just to spice things up.

TIME
is Relative
for a
KNIGHT
of Time 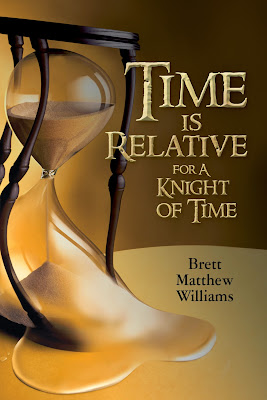 Meet Rolland Wright - a seventeen year old orphan living out of his car in rural Woodland Hills, California. Aside from grappling with the fact of being abandoned by his drunken father two years previous following his mothers mysterious murder, his life mostly revolves around finding a warm place to sleep at night.

When one day he is attacked by men claiming to have killed his father, Rolland discovers a strange ability to slow the flow of time around him, beginning a journey that takes him to places outside of time, space, and eventually to the early 19th century to fight the sinister General Andrew Jackson. With the help of a rag-tag group of historical and mythical figures with various supernatural abilities of their own (Joan of Arc, Jesse James, etc) known as the Knights of Time, Rolland solves the mystery behind his mother's murder, falls in love, battles the evil Edward Vilthe - reaper of souls, and finds a home of his own in the paradise known as Eden.
The Time is Relative series chronicles the origin story of the mythical figure Father Time, beginning with the award winning first novel, Time is Relative for a Knight of Time. All dates and events are historically accurate. The participants... maybe not.

It was a muggy, humid morning when U.S. General Andrew Jackson woke to the sound of tribal horns. Immediately identifying their purpose, he quickly gathered both his wits and his pants, grabbing his sword and sidearm as he left his tent.

Known to be tough as hickory, Andrew Jackson was a moderately tall man for his time, standing at six feet, one inch. In this and in his military rank he was often compared to George Washington among elite society in Boston, Washington, and New York, despite his humble beginnings.

Jackson’s rigid demeanor was only matched by his sharp attention to detail. His crisply, pressed uniform was such that it demanded the attention of all the company’s men. Each stood at full attention, showing perfect respect for their commanding officer as Jackson made his way through the columns slowly, careful to catch each and every pair of eyes.

“Today we fight like dogs, and live like kings!” Jackson roared to his men, who cheered loudly in response. Their gusto and appreciation for their General’s bravery in the face of danger was not unnoticed by his adversaries on and off the battlefield.

A slave, brought directly from Africa on Jackson’s orders, walked Jackson’s horse to him around the hustle and bustle of preparing for the day’s campaign. A light rain began to fall on the heads and shoulders of every soul under the barely visible sun, uniting them in nature. They all felt the soft droplets as they landed on both white and brown skin alike. Lightning struck diagonally across the gray sky, followed shortly by an attention-stealing clap of thunder that rocked the previously dry Florida landscape.


Brett Matthew grew up with a passion for both film and history. He began his career fresh out of high school as a Production Assistant/ football player on NBC Universal’s television series Friday Night Lights (of which he can often be seen in the first two seasons as a member of the championship team – Go Panthers!).

He quickly moved on to serve as an Original Series intern with the USA Network in Studio City, California. Following work on shows like Monk, Psych, and Burn Notice, Brett returned home to Texas to continue his education, graduating with his degree in History from Texas State University. A proud Master Freemason, Brett thoroughly enjoys fantasy fiction, watching Netflix, running, baseball, Shakespeare, and spending time with his family and critters.


Where can you find Brett???

Thanks for stopping by today Brett and the best of luck on your tour!