Jennifer has been a very busy lady. Not only is she touring with her newest release FINAL SURRENDER
but Jennifer along with her fellow Authors paid me a visit during their ELITE METAL tour back in February.

Let's check this out!

1. I curl my bangs after my shower, before I go to bed so they’ll lay right the next day.

2. My stomach has a nerve problem that I have to take medication for so I can eat.

4. One of my greatest wishes in life was to be a mom.

5. Can’t sleep without a noise machine.

7. I could survive the rest of my life without watching television.

8. I want to go skydiving this summer.

9. I don’t normally drink caffeine, so when I do…BOING BOING BOING!!

10. Instead of wearing my contacts for 2 weeks I wear them for a month. Cause I’m a rebel like that!


Jennifer Kacey will be awarding an e-book from her backlist as well as a swag pack of goodies from several authors to a randomly drawn winner via rafflecopter during the tour. 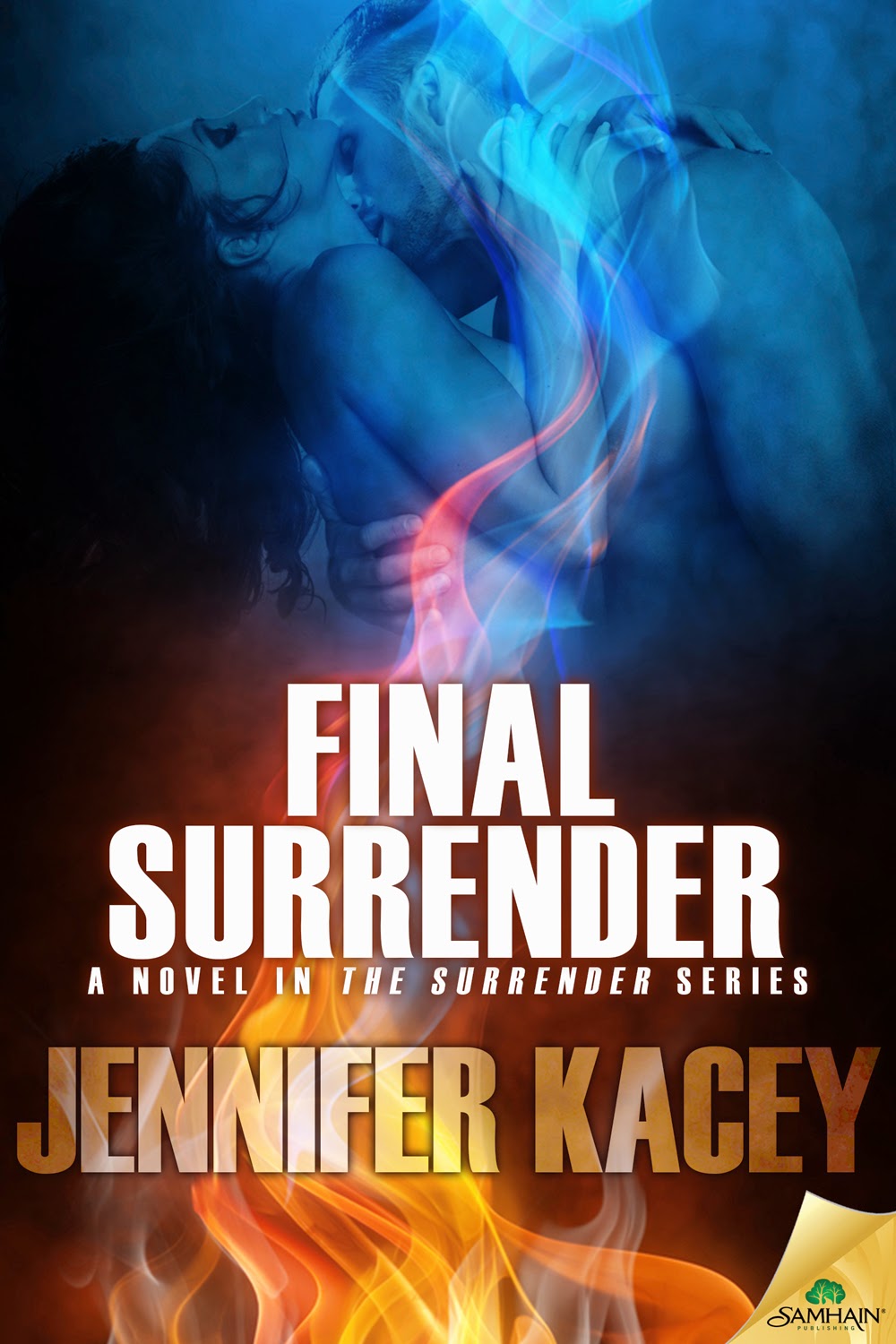 Ten years ago, Angela Meyers told everyone she went to New York to find herself. It was a lie. She fled from the aftermath of one hot night with Clay Waters. A night filled with wet heat, all-consuming releases…then his regret.

Now, with a stalker threatening to destroy her career, there’s only one man she trusts to protect her. The man she still loves, hates, needs with every breath she takes.

It’s not that Clay never craved his best friend’s younger sister. With a ticket to boot camp burning a hole in his pocket, he couldn’t allow himself to love her. The moment he lays eyes on her again, the old need—to take down her tightly wound hair, press her long, lean body to his—surges inside him stronger than ever.

But this is no ordinary bodyguard assignment. The best way to identify the voice in Angela’s shadow is to lure it into the light of day. Even if it means convincing her to trust him with her heart…and surrendering his own.

Sneaking down her own hallway wasn’t exactly something she thought she’d ever be doing. Creeping past the guest rooms occupied by her brother and the man she lo—
Not going there.

A step creaked as she moved down the stairs and she immediately froze.

Holding her breath, waiting for them to catch her, made her feel guilty so she exhaled, making extra noise and stepped down to the main floor. This was her life and her home and, by God, Clay wasn’t going to show up and make her forget everything she had worked so hard for.

They were just being paranoid.

She hesitated again at the door and ran her fingers over the healing scar on her wrist. Her safety was important. She recognized that, but staying inside, shaking like a scared Chihuahua didn’t sit well with her either. It was only a block down the street to get a coffee and paper. She’d even bring them back something. A peace offering should appease him. Them. She meant them.

She should leave a note. She grabbed a notepad from behind the front counter, told them what she was doing and went back upstairs, leaving the paper on the kitchen table.

Feeling better about informing him of her plans, she didn’t hesitate as she grabbed the door lock.

The tumbler on the door snapped as she opened the door and relief swept over her. Being inside was awesome until you did it because you were scared.

She stepped outside, locked the door behind her and stood in the crisp morning air. After looking both ways to make sure no one was there, and listening to her Spidey sense…she snickered at her own joke and leaned back against the building.

Nothing seemed out of place. Fear didn’t close in on her. It was just a nice morning.
Yeah, okay, butt-crack-of-dawn morning, but it was past five o’clock so it counted. Barely. Close enough.

Closing her eyes for a second, she stepped away from the building and headed down the block. Birds were singing and the breeze smelled like honeysuckle.

Actually, there were cabs honking and it smelled a bit like garbage when the wind wasn’t blowing but whatever. She was outside and nothing was going to ruin her happy.

Lazily, she made her way to the coffee stand and Enrique greeted her as he did every morning.

He grabbed a paper for her and set it on the counter. “You haven’t been by the past few days. You okay? I worry about you.”

“Join the club,” she murmured under her breath as he filled a cup of coffee. “Can I get three today? And I’ve been okay.” Mostly not a lie. “Been really busy.” Definitely not a lie.

“But you were hurt last week, no?”

“It was nothing.”
He gave her a funny look. “Nothing doesn’t give you a bump on the head and a cut on your arm.” He patted her hand and turned around to make more coffee. “Three today. For you anything.”

“You say that to all the girls.”

“Yes. But for you I actually mean it.” He set the other coffees on the counter.

Adding cream and sugar to her coffee, she tried to laugh off his worry. “Sweet talker.”

He grinned from ear to ear, as he took her money and made her change. “You need help getting these back to your place? Hermano will be back in just a minute from making a delivery and he could help you.”

“No, no,” she told him, pocketing her change as she tucked the paper under her arm and lifted hers to take a sip. “This is awesome. Mmm…and I’ll be fine. It’s close.”

Enrique glanced over her shoulder and his eyes went wide.

Angela whipped around, letting go of the first cup of coffee and it splashed to the ground. The man dressed in black, hovering over her, latched on to her wrist and yanked her toward him. The paper scattered in the wind and Angela screamed. Fighting the hold he had on her arm, panic took over and she lost her balance.

Hitting the concrete, she scooted backwards on her elbows and tried to get away. The lights above him hid his face and he kept advancing.

Something was in his hand.

“Clay!” she screamed for help, as her back touched the wall of a building.

She was trapped and the man kept coming. 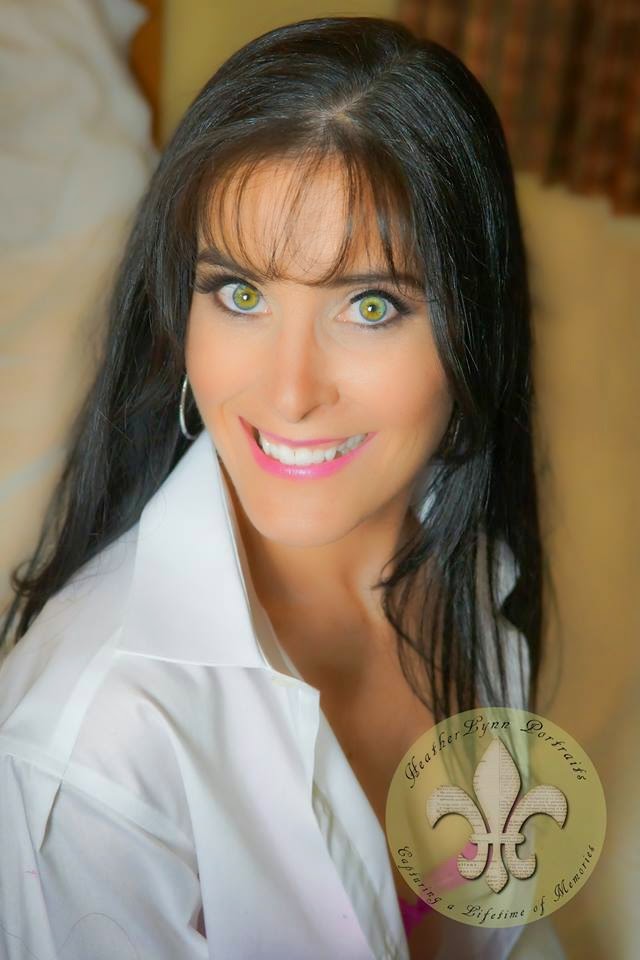 Jennifer Kacey is a writer, mother, and business owner living with her family in Texas. She sings in the shower, plays piano in her dreams, and has to have a different color of nail polish every week.

She’s the Amazon top seller and award winning author of the Members Only Series and the Surrender Series along with several stand alone novels and novellas.

The best advice she’s ever been given? Find the real you and never settle for anything less.

Thanks for stopping by today Jennifer and the best of luck with
FINAL SURRENDER.