****GIVEAWAY ALERT****
Andrea will be awarding a $20 amazon gift card to a randomly drawn winner via rafflecopter during the tour.
*******


What is your biggest inspiration?

Apart from the fact that I love to write fiction, I get my inspiration in few different ways, which when combined create the magic I need to write a novel.  I brainstorm with a writing friend occasionally and its great fun to play around with different ideas.  The inspiration for the novel I’m working on now, Gypsy Cradle has come about almost the same way I gained the inspiration to write Gypsy Hunted.  General observation of people and situations around me, until I found one small thing that gets me thinking “What if…?”  combine that with recent (usually criminal) events reported in the media and a whole lot of imagination and in a rush of enthusiasm and excitement a novel begins to take shape.


Where did you get the inspiration to write (book name)?

A friend and I Eve are both busy working mums but decided to meet up every couple of weeks to motivate each other and play around with story ideas.  Originally we decided we’d motivate and inspire each other ideas wise, and be accountable to each other and report back on short stories we’d written, as we planned to enter our short stories into competitions.

I found a short story competition with the theme of “Time” and came up with an idea that involved a telepath or psychic and threw around some ideas with Eve.  That week I started writing the short story but found I couldn’t stop I was fascinated by the story and characters, a fantastic feeling.  From here I kept on going and would bring in pages and pages for my writing buddy.  Eventually it was getting so long that it was costing me a fortune in printing and taking Eve a long time to read.  So I realized then it would become a novel, and so it has!


What research went into (book name)?

Originally there was no research at all done I was swept away by the idea for the story.  As time went on though I realized I knew nothing about police investigation.  I read a book called “Howdunit book of police investigation” by Lee Lofland which was invaluable.  As the book is set in Melbourne Australia, I also, believe it or not googled Australian police weapons, vehicles and procedure and there it was!

The characters are a combination of people I’ve met and imagination.  I’ve started a little research on the next book which involves poisons, which is fun!  My husband says he feels a little afraid though.

I didn’t really write for a genre but before writing my first novel, as a reader I gravitated toward mystery/thrillers and so decided this would be the best genre to write in, write what you know and all that.  However, I mixed in a few other elements and genres that I enjoy.  So Gypsy Hunted is primarily a thriller/suspense but also has elements of paranormal and romance in there without going overboard. Basically I wrote what I wanted to read.  I do like sci-fi/fantasy as well, and may venture into that genre, but then again I may not!   I have three Gypsy Shields novel books planned out so will write those three first then reconsider.


Your favorite aspect about being an Author?

That I can create characters and world and the story goes where the characters and I want it to.  I also like the idea of writing a character that is likeable but has human faults.  There’s nothing worse for me than a perfectly evil villain, or a perfectly good person.  We’re just not made that way, we can be a complex mix of good and evil.  I love writing a good story but a realistic story, something where the reader turns the pages to find out what happens next, but with relatable events and characters with real life problems.  Creating worlds, scenarios, characters and events is the best kind of fun there is!

The hardest part about writing is…

Setting aside the time to write.  Who the hell invented housework anyway?  Also when I’m writing the first draft, most authors let go and let it all come out in a rush.  I do that to a degree, but it’s not easy.  I’m so tempted sometimes to go back and fix sections when I’m still in the early days.  Also writing every day can be a challenge.  I recommend this to all writers, but in the chaos of life, family and business responsibilities it can be difficult but I try to do so, even if it is only a couple of hundred words on frantically busy days.

A day with (you) behind the scenes.

I wake up bleary eyed and head downstairs to help get my three children ready for school.  Once the chaos and arguments about socks and lunches is over, I come back home (I have an office attached to the house) and check emails and phone messages.  If I’m very lucky, I can get started on fiction writing straight away and will spend around 2 hours writing.  This gets me anywhere between 500 and 2000 words.  From there I respond to client emails and phone calls, write resumes and copy and intersperse it with housework (*sigh* if and when I become rich, my first investment will be in a housekeeper)
Around 3.30pm I pick up said children, then its witching hour with dinner baths and bed.  Then if I haven’t collapsed with exhausted, I’ll do some marketing work on the books.

Actually I’m pretty happy with my writing space although of course writing on a yacht or a beach from my laptop sounds pretty ideal!  I have a writing bunker in my office, which seats four people comfortably and has a separate entrance.  The home we live in now was quite a find.  Ideally I’d write in my bunker for weeks at a time uninterrupted but sadly my life doesn’t quite work that way.  I do have a window next to my desk though, and can look out onto my front garden, which is lovely in spring and summer.


Where do ideas come from?

As a writer, I get my inspiration from the every day.  As a young girl I experienced this almost constantly.  I’d look at people on the bus and train and imagine their stories.  Why were they travelling?  Who were they?  What problems were they trying to solve?  Married?  Alone and lonely?  I find these questions help me to this day, I will see events and people around me and ask myself questions about them.  When this combines with a seemingly unrelated event (for example something reported in the news) the two things mess together, and an idea for a story forms.  From here I roughly plot it all out (and I do mean roughly) and if the story is good enough and excites me enough, I’ll get going on writing it. 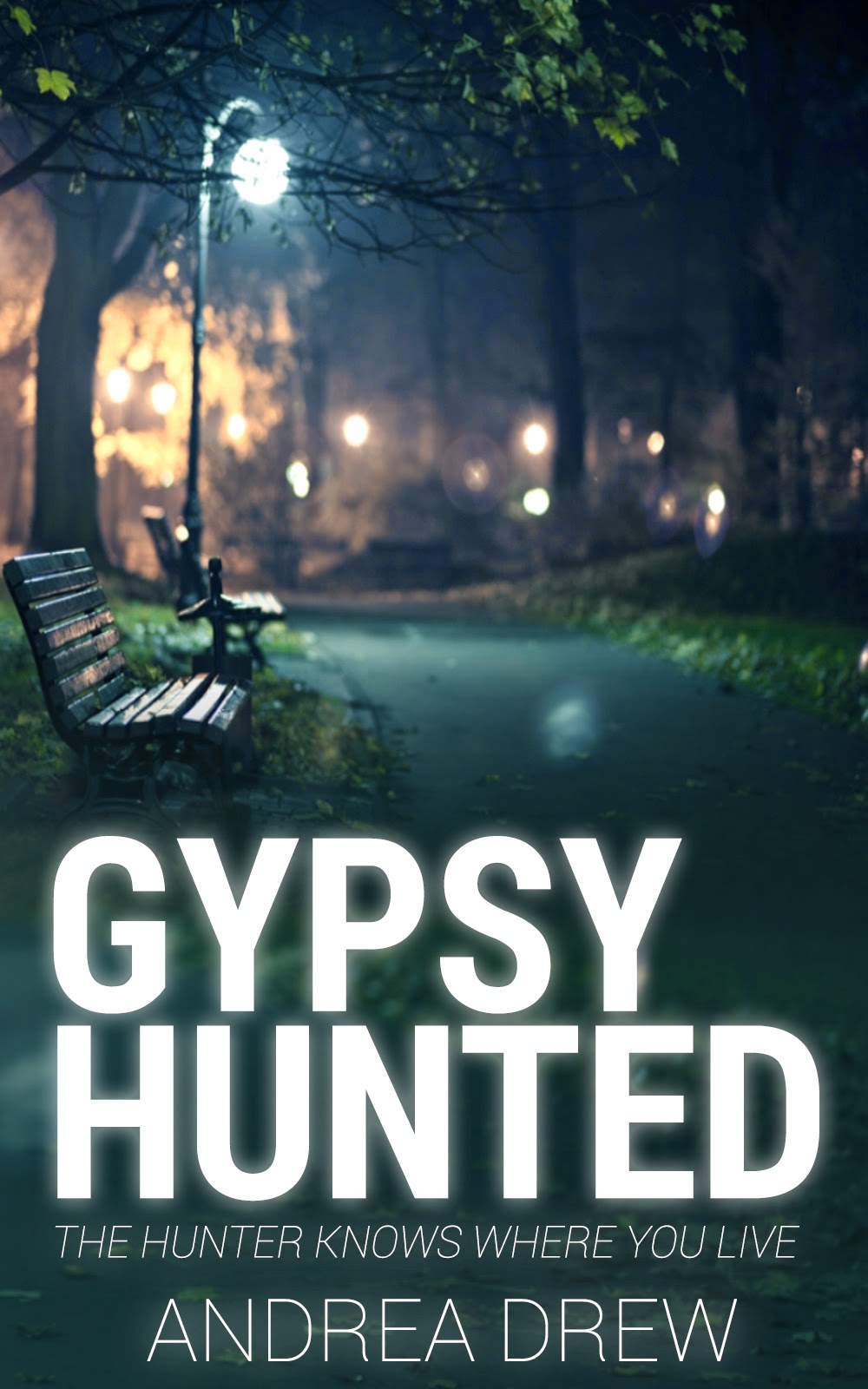 Reluctant psychic Gypsy Shields—she prefers the term "intuition consultant"—finds herself in trouble when, on her way home from a blind date, she interrupts a kidnapping in progress. She attempts to intervene, and her heroics are repaid with a collision between the attacker's van and a brick wall. She awakens in the hospital, paralyzed on her left side and unable to speak. This also means she's unable to share her vital information as a witness. Fortunately, she is able to use her telepathic connection with her niece to throw a line out to a police detective she knows: Connor Reardon, her blind date.

Connor will do anything to protect Gypsy, and he listens to her claims of psychic power willingly, as he's concealing certain powers of his own. Nor are they all he's concealing. Gypsy senses a part of her new ally's mind is closed to her—what she cannot know is that Connor suspects the kidnapper is someone close to him, and the kidnapping victim holds secrets that will tear through Connor's department, putting careers and lives at risk. Including Gypsy, still in hospital and vulnerable as the attacker turns his sights on her once again.

Can she use her powers to track down the perpetrator and prevent her own murder?


As a telepath, I pick up on feelings and instinct more than most. Other people like to call me a psychic medium, but I’m not really comfortable with the label.  Apart from the fact that I do it for love, not money, I’m sure once someone learns I’m a telepath they conjure up images of dodgy fraudsters on stage at mass events, feeding grieving families what they desperately need. I’d rather not expose myself to more ridicule than necessary. My abilities happened almost by accident—apparently my grandmother was ‘fey,’ as my mother enjoyed mentioning.

I was sure the pinging, nagging doubt had something to do with Aaron’s home life. “What about you, Gypsy? What do you do?” Connor relaxed his posture, the glass poised before his mouth. He had taken on a different look, probably from the wine, or even better, from unfulfilled lust.

That seemed to spark Connor’s interest.  He pulled at the other earlobe.

“Oh yeah? What does your intuition tell you about me, then?”

Connor moistened his lips, which quivered with what I suspected was amusement as he sat legs wide apart

“And you’re fishing for compliments that I’m not going to give you just yet.”

Connor threw his head back, indulging in a belly laugh. The rich, throaty sound filled me with pleasure. A smile I couldn’t suppress burst through.

The silence was a comfortable one, our shared joke establishing the early threads of friendship.

Amazon US~  Gypsy Hunted Available for Pre Order on Amazon:

Andrea Drew has been a commercial copy writer and resume writer for over a decade.

Her self-published book "Pro Resumes Made Easy" has been downloaded over 40,000 times.

Andrea has one husband (more than enough), three kids, a pet rock (her daughters not hers), and a house in the suburbs, where she's hard at work on the second novel in the Gypsy series.

Gypsy Hunted her first fiction novel (her first suspense thriller set in her home town of Melbourne Australia) is available for pre-order on Amazon prior to release on October 28 2014.


Where can you find Andrea??? 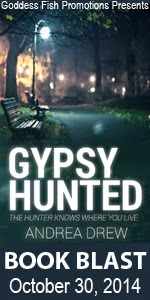 Thanks for stopping by Andrea and the best of luck with GYPSY HUNTED.