A Perfect Trade
by Anna Sugden 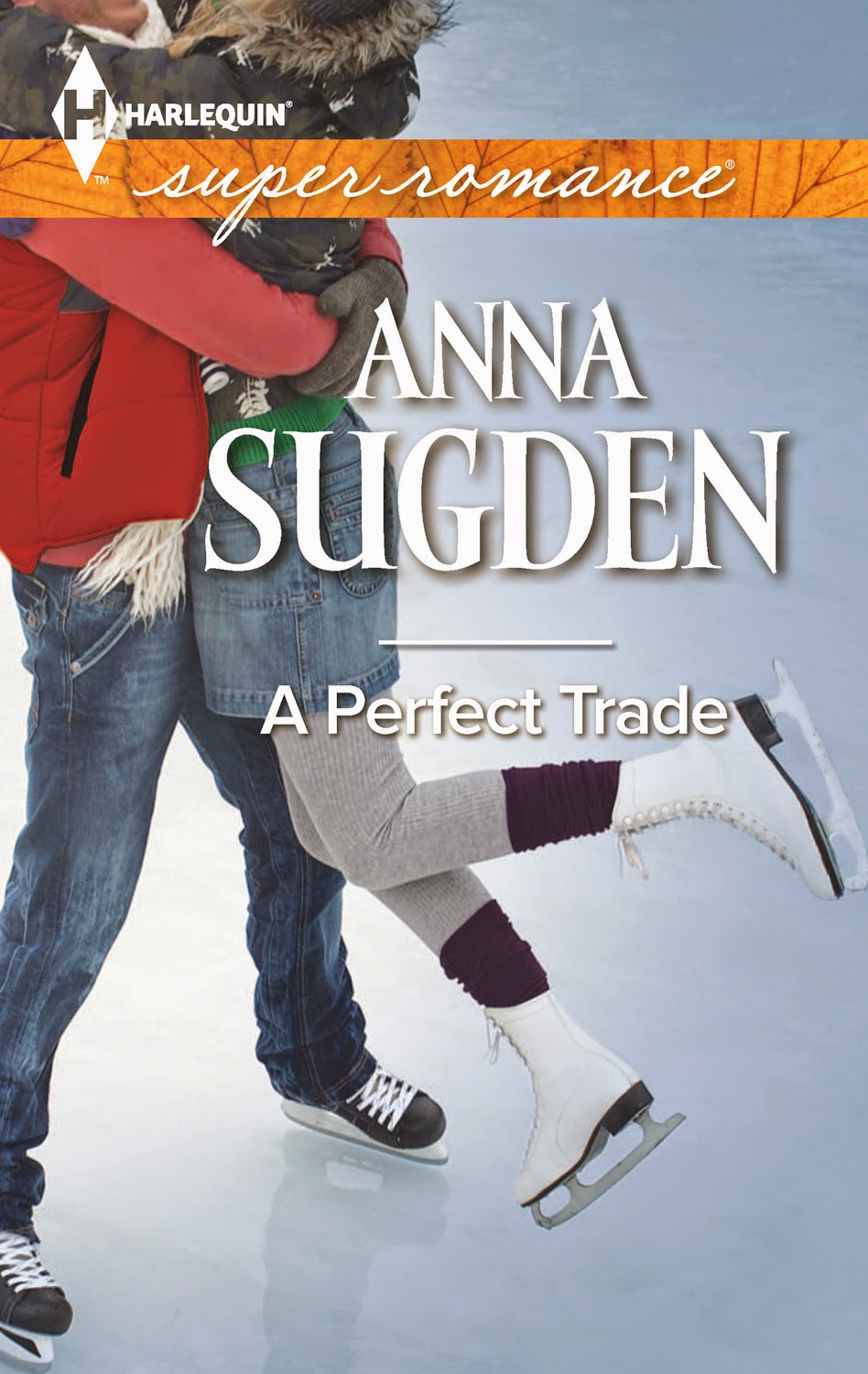 Truman "Tru" Jelinek's life is pretty much off the rails. With his professional hockey career on thin ice, and his personal life falling apart, he's ready to implement some serious changes. Helping Jenny Martin—the only girl he's ever loved—make her dreams a reality is a good place to start.

There's just one problem: Jenny doesn't want his help. She barely wants to speak to him. But Tru is prepared to negotiate a deal that even Jenny can't refuse. As trading favors turns into sharing passion, he has to face the truth that when it comes to Jenny, the game is far from over.

A familiar tickle between his shoulder blades alerted Tru to who his brother was smiling at. Though he knew it was a mistake, Tru couldn’t resist turning around.

His heart jerked in his chest, as it always did when he saw her. As it had since the first time he saw her, back in first grade.

Her smile, bright for his brother, faded when she noticed Tru. Her expression became cool and distant before she turned away pointedly.

Tru’s gaze lingered, despite his best intentions. She must have come straight from work; she wore a blue suit that matched her eyes. The above-the-knee skirt and coordinating blue spiked heels showed off her long, shapely legs.

His stomach twisted when a man approached Jenny and hugged her, before pulling out a chair for her. There was something familiar about the guy. Tru’s tension eased when he realized it was her boss, Harry Sturridge. Though Tru was annoyed with himself for caring who Jenny ate dinner with, he couldn’t help being relieved it wasn’t a teammate. He wasn’t in the mood to deal with that tonight.

Sturridge said something to make Jenny laugh. The husky sound seemed to reach out and caress Tru through the bustle and noise of the restaurant.

Shifting to ease the sudden tightness in his groin, he forced himself to look away and focus on his meal, slicing into his rib eye.

Surprised when Ike didn’t make his usual crack about the antagonism between him and Jenny, Tru looked up. Ike was staring at the television, where, based on the logo on the screen behind the commen­tators, a studio panel was discussing the Ice Cats.

“I’m not sure.” Ike pulled his cell out of his pocket, tapped the screen and frowned.

Ike didn’t keep him in suspense. “The Scartellis just fired Phillip Hannah. They’ll announce a new general manager in the next few days.”

Tru’s appetite vanished. That was a bigger orga­nizational shake-up than anyone had anticipated. “Max’s days must be numbered, too. A new GM al­ways wants to bring in his own coach. That means changes throughout the roster—maybe even a total rebuild—and the easiest guys to get rid of are the un­restricted free agents.”

Tru pushed back his chair angrily. “That puts my neck firmly on the block.”

“Cool your jets. The team needs experienced play­ers, even in rebuild mode.”

Ike couldn’t deny that. “The Cats won’t let you go for nothing. They’ll want something in return. On the upside, lots of decent teams need a skilled defense­man.”

“Great. Except I don’t want to move. I don’t want to start over with a new team, in a new town, with a new freaking system. I wanted to spend the summer making sure I was 100 percent fit for next season, not looking for somewhere to live.”

“Talk to Andy. That’s why you pay your agent the big bucks. Find out what it would take for them to re-sign you.”

“Right.” Tru stood and tossed some bills on the table. “Catch you later, bro.”

Tru wound his way between the tables, heading to­ward the door. What a great year; first his love life, then the season and now his career going down the toilet.

Almost too late, he realized he couldn’t avoid pass­ing Jenny’s table. He tried not to catch her eye. Unfor­tunately, as he walked behind her boss’s chair, their gazes clashed.

His pulse jumped. Heat seared through him.

For an instant, Tru thought he saw an answering fire in her turquoise depths, but it was extinguished im­mediately and replaced with ice. She averted her eyes abruptly and smiled softly at her dinner companion.

The sting of the virtual slap was as sharp as if her palm had connected with his cheek.

Tru continued without breaking his stride. Her laugh scraped his raw nerves like a whetstone on a steel skate blade.

Jenny’s reaction toward him was the one thing he could rely on right now. Wasn’t that a sorry state of affairs? He pulled out his cell and called his agent, desperately hoping there was something Andy could do to keep him with the Cats. Unfortunately, Tru’s gut told him the chances of a miracle save had just skated out of town with his GM. 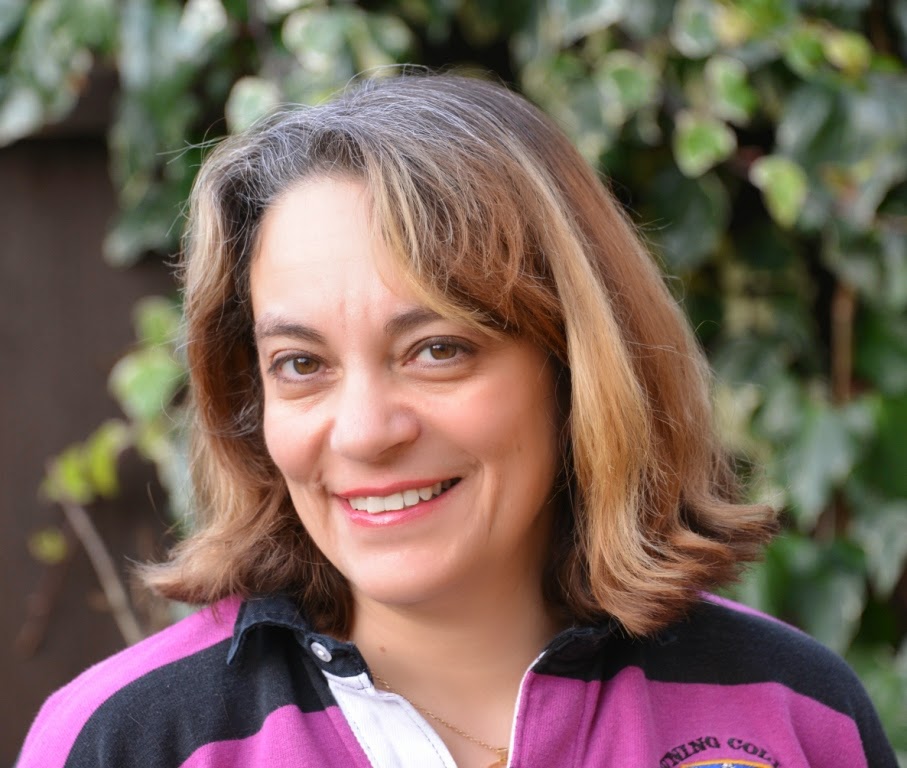 A former marketing executive and primary teacher, Anna lives in Cambridge, England, with her husband and two bossy black cats. Learn more about Anna, her heart-warming romances and her shoes at www.annasugden.com .

WHERE CAN YOU FIND ANNA???

FOLLOW THE TOUR!!!
The more you comment, the better your chances of winning. The tour dates can be found here:
http://goddessfishpromotions.blogspot.com/2014/06/book-blast-perfect-trade-by-anna-sugden.html 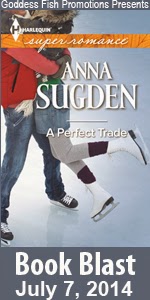 Thanks so much for stopping by today Anna, and the best of luck with A Perfect Trade.