Contracts, bets and Spells...oh my!

I'd like to share with you my newest release The Bannockburn Spell. It is about two people brought together by a spell, an anctient marriage contract and nosy families members. Of course those families members planned this event 800 years ago, they're still pretty nosy nonetheless.
Enjoy!


With the help of a bet, an eight-hundred-year-old marriage contract and a spell, ex-SBS soldier Will might just have enough in his arsenal to capture Meghan’s heart. 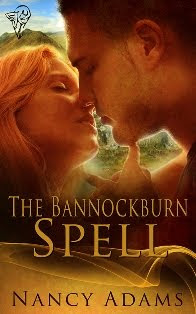 Since arriving in Little Glen, Scotland, Meghan Kennedy’s life has got decidedly more interesting. She enters into a bet with hunky ex-SBS soldier, William MacKenzie, discovers an ancient marriage contract and to top it all off, she learns that she had a spell cast on her…eight hundred years before she was even born. None of it matters, because she refuses to make the same mistake twice. Will’s hard body and sexy grin don’t matter, his beautiful hypnotic eyes don’t matter, and it doesn’t matter that every time they kiss her body calls out for his, as though denied of his touch for hundreds of years.


Ex-SBS soldier William MacKenzie is disciplined, trained to be an efficient soldier and he takes the same approach with his life as he does his business. Then Meghan arrives, with her fiery temper and hair to match, all he can think about is Meghan. Her feisty temper bemuses him, her beauty astounds him and her stubbornness annoys the hell out of him. Lucky for him, he doesn’t know how to quit, he can be just as stubborn and occasionally ruthless, and he will use any means necessary to get her. Of course the ‘means’ at his disposal just happen to be a bet, a marriage contract and an ancient spell, but if in the end Meghan belongs to him, who is he to argue?
Okay so you’ve read the blurb now how about meeting the main characters.  First up is Meghan Kennedy,
A spell, a marriage contract, and a bet.  Pretty strange stuff huh?
How do you think I feel? That spell was cast on me.  Sheesh!
Really…who in their right minds would cast a spell on two people that aren’t even born yet?  Crazy Scottish lairds that's who!
And NO, I don’t care that they were my distant relatives and that they were only thinking about my happiness?  They are totally nuts.
And you know what’s even worst about this mess, is that damn prehistoric marriage contract and the fact that Will and I were so easily trapped by it. Urgh!
As for the bet…that was Will’s idea.  I didn’t want any part of it but he pretty much called me chicken and me being a Kennedy and a redhead I couldn’t back out.  That man drive’s me crazy!
I didn’t want to be in the position where a man would try to control my life again.  I had been there and done that with my ex- boyfriend and I hated myself for it.  Then Will had to come into my life with his naughty words and hard body and I temporarily lost my marbles.
Regardless, I agreed to his bet and in the end, there will be a winner and a loser.
Wish me luck!
Now let us hear what William MacKenzie has to say,
Unlike Meghan, I don’t believe there will be a winner or a loser, just two people that will find love.
The bet was indeed my idea and it was a tactic used by a man who wasn’t experienced in losing.  I am however more than willing to fight for what I want.  I was after all trained by the best the Special Boat Service has to offer and thank Christ, because Meghan was one hell of an opponent but worth every agonizing moment.
As for the marriage contract and the spell, I don’t see things the same way as Meghan.  I see an opportunity to capture the woman I want, and as any properly trained soldier would tell you, you never turn down a weapon that is sitting in front of you.  So I used them…both.
I would prefer that our journey is smooth, although I highly doubt that it will be.
But I can tell you it will be well worth the fight.
Now that you have met Will and Meghan and have heard what they have to say, I offer to you an excerpt from The Bannockburn Spell.

“There is no way this contract is—”


“Possible?” Will supplied, looking down at her finger. “Oh, it’s possible and it will happen.” She was a brave lady to be poking him in the chest, the last person to poke him in the chest had ended up getting a few broken fingers for his effort. Except this wasn’t anyone, this was Meghan and he loved her feisty temper, it made him want to pin her to the wall and do wicked things to her. He focused on her mouth as he continued, “But how it happens is up to you.”


He raised an eyebrow at her remark. This wasn’t how this was supposed to turn out, she wasn’t supposed to find out about the contract. He had decided not to use it after seeing her earlier. He wanted to win her on his own. But the time had come for Meghan to understand that he never gave up, or gave in, to anything in his life and he wasn’t about to start now. He would get what he wanted, and at that moment, he knew with complete certainty that he wanted Meghan.


“Yes, it will.” He laced the words with smooth confidence. “You can come to the realisation on your own and agree, or you will be told to. The choice is yours. I would rather you realised it on your own, but I have no problem with the alternative. Either way, I win.”


A person would’ve had to have been blind to see that she didn’t like what she was hearing. She threw a hip out to the side and placed her hand on it, daring him, “If you think this piece of paper will make me do anything, you are living in a dream world, but I’d like to see you try.”


He expected nothing less and was impressed by her courage. “Are you sure that’s what you want?”


She raised her chin. “I told you I like to gamble. Give it your best shot.”


God, she was beautiful when she was mad, her passion was overwhelming. This fiery side was making him hard. The sudden image of him riding her against a tree in the forest appeared before him. Her red hair was long, longer than she wore it now and it was hanging down her bare back as she clung to his neck. Her dress was gathered around her waist and her lovely legs were wrapped around him as he pounded into her again and again, her wet core squeezing him. His cock jerked to life as Meghan came back into focus.


What had just happened? He blinked, fighting his body. What had they been talking about? Gambling. “That’s right, you like to gamble, then how about a little wager?”


He crossed his arms. “I bet that you fall in love with me.”


“Well, then this should be easy for you.”


She clicked her tongue.


“Not scared, are you?” He gave her pride a nudge.


She mimicked his stance. “What are the stakes?”


He smothered a smile. “If you win, you’re free from the contract. But if I win…” He lowered his head until they were nose to nose. “I get you.”


Will saw the doubt cross her face then decided to give her pride another poke, just enough to get what he wanted. “Think you can win?” Straightening to his full height, he held out his hand to her.


She eyed his hand suspiciously, then slid her smaller hand into his. “You bet I can.”     He held fast as she tried to pull back, running his thumb over the back of her hand. The skin was so soft and smooth and for some reason he already knew what it tasted like. His mouth watered. “Good.” He drew in her lavender scent. “You’ll forgive me if I don’t wish you luck. I don’t want you to win.”


Meghan’s mouth dropped open in shock and she snatched her hand away. “You’re an asshole.”


Will grinned. “I have my moments.”
So there you have it, The Bannockburn Spell, I hoped you enjoyed the little teaser.
Cheers,
Nancy