Let's talk about flaws. I have many but then again who doesn't. One of my worst, is the ability to remember names. I can remember any face, but to pull the name from my grey matter that belongs with that face. No way! To be honest, if it wasn’t for my driver’s licence, I probably wouldn’t remember my own name.


Man, what I wouldn’t give to have a better memory, just to avoid those embarrassing situations. To have a little index file in my head, with a picture of every person I’ve ever met in it. I wouldn’t have to struggle to remember the simplest thing like a name, all I would have to do is look at their face and...Pop! Their name and a few import facts would appear in my head. That would be sooo awesome!


Of course ‘The Mindex’- Patten Pending- could be applied to many different situations. Getting those A+ grades in school, becoming the go-too guy at work. Increasing your social status in life as you amaze everyone with your knowledge of useless information.
Ha ha! Okay, not all of these examples are user friendly, but having a better memory couldn’t be all-bad, could it?


Well it certainly wouldn’t be all good! Who in the hell, wants to remember that time you insulted a nice guy/girl in high school because you thought it was cool! Or remember when you had a piece of food stuck between your teeth and as you walked down the hall trying to pick it out, the hotty you’ve been drooling over for two years walks by and smiles at you.


How about this last example, which is all that more humiliating because it was my first brush with fame. I was in a bar downtown Toronto, playing pool (well...I wasn't actually playing, I was more of the official cheerleader/drink tester) along with my friend Katie. We were chatting and having a good time when a popular T.V actor/comedian began talking her up. As I sipped my drink listening to the smooth pick-up lines, his friend (also a famous actor/comedian)  stepped up next me and smiled. I was so dumbfounded to see this incredibility funny actor standing next to me that I babbled out, “Nice shoes.” to him.
NICE SHOES!  Really! Come on!


To this day, every time I see his contagious smile on the little or big screens, I remember my idiotic remark and groan in my head. On the up side, I can scratch # 10-Making a fool of myself in front of an Oscar-winner, off my bucket list.


With that embarrassing moment of my life out in the open, I think it is safe to say that not all memories are worth keeping. Nevertheless, what about those special few, that have the incredibly ability to remember everything that has ever happen in their life. In my book No Matter When, my heroin Lilly Marten deals with her photographic on a daily bases and unlike the rest of us, has the ability to control her memories. Which is a bonus, because Lilly has been shifted from 2012 back to 1503 medieval England, where two soldiers from the future, a boy-genius from the ‘80’s and a doctor form the ‘40’s have been waiting for her.

Here’s a quick teaser from No Matter When.

“Then you checked into Lilly’s future, just like you did with the rest of us?”


McGill began to fidget as he answered, “Yes.”


Gabe narrowed his eyes, watching the man shift awkwardly back and forth. That was the one thing Gabe didn’t like knowing—that this man had been researching his life before the day he was supposed to die. But the tone of McGill’s words held something else when he spoke of Lilly. A grey area between fascination and infatuation. Had it truly been dispassionate research with Lilly, or something else? Regardless, the idea of him researching her, looking into her life, watching her without her knowledge, was enough to make him want to reach out and squeeze the little freak’s neck.


Gabe lowered his voice and made certain the professor could hear the threatening edge. “Why Lilly, McGill?”


“I told you, there was something I found intriguing about her. But I couldn’t put my finger on it, so I did a little digging.” McGill spoke quickly, taking a few steps backwards.


Gabe wanted to laugh at the futile attempt. “Backing away won’t help, and you know it.” McGill was fully aware that Gabe could clear the distance in one move. McGill’s mentors were the ones who had created him. “And what did you find?” he asked coolly.


“She was a normal kid with normal habits. Her life was normal, until she was twelve and she and her mother were in a car accident. The mother died and Lilly sustained a concussion.” Gabe scowled, bothered by the choice of words. The mother. The man was so bloody scientific it made him cringe.


McGill began pacing around in circles. “A few months afterwards, her habits changed. She became withdrawn and introverted, where before she had been outgoing. Her grades in school went from average to above normal and, by the time she was fourteen and entered high school, she was studying at a college level. Gabe,” the professor stressed, “Lilly is not just a smart, or even gifted, woman. She has the ability to retain any information she reads, hears, or even sees. And she will never lose or forget the knowledge she has gained over time like you and I will.”


Gabe frowned. “You’re saying she has a photographic memory?”


“More than that. She has perfect recall—perfect. And I believe the concussion she suffered during the accident was the trigger point.”


Gabe’s frown deepened. The skills he had, he’d had from the moment he was born. He’d never had to learn to adapt to them. Whereas Lilly had received her extraordinary skills after twelve years of a normal life, had received them while dealing with the death of her mother. Bloody hell. He wasn’t altogether sure if he would really like to have her talent—there were some things, no doubt, she would choose not to remember.


“I want to see her, Gabe. I need to explain how and why she is here. She deserves that much.”


“Yes, she does,” Gabe agreed coolly. “I’ve explained as much as I could. As for the whys, you will have to explain it to all of us, together. Unless you plan on bringing someone else into our little group?”


“No. Lilly was unexpected, but she was the last.”


Gabe nodded. “She’s still sleeping. Go to the hall and have something to eat. Once she’s awake and has had a chance to eat and get cleaned up, I’ll send Harry to get you.”


“I should really speak to her right—”


Gabe put up his hand, silencing the professor. “When she is awake and ready.”


“That’s too bad. We, on the other hand, seem to have a great deal of time. Wait in the hall.” Gabe turned and walked away.


A gut feeling made him stop and turn back to McGill. From inside the dark alcove, Gabe watched as McGill, a good twelve feet away, played nervously with his cloak. Tensing his muscles, Gabe cleared the distance without a sound, landing directly in front of McGill. He ignored the professor’s shocked expression as he held out his hand. “Give it to me.”


Gabe fixed his sights on the professor. “The TSIS. Give me your tracker.” Covered with sweat, McGill reached into his grey cloak and hesitated.   “Now!” Gabe barked.


McGill jumped at the sharp command but followed the order. He pulled the tracking device off his belt and placed it in Gabe’s hand.


“Thank you,” Gabe said politely. “I try to trust you, professor, but sometimes I find it difficult.” He waved the tracker in front of the man’s face. “You’ll get this back once we’ve had our group discussion.” 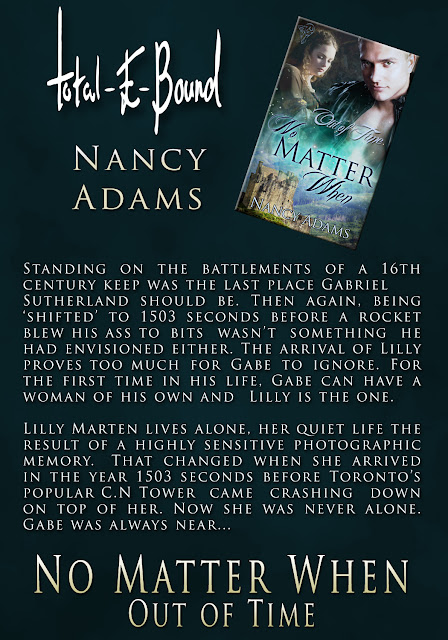